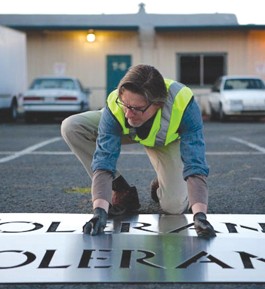 Whether scrounging for a spot at Safeway or simply trying to avoid the meter maid, “charity” isn’t usually the first word that comes to mind when it comes to parking.

Neither, typically, is “kindness,” “compassion” or “honor.” Conceptual artist Peter Hassen aims to change that this month with the premiere of the Values Project, where he and his crew of volunteers paint stenciled values in 30 parking spots around Napa. “There are just so many different people out there, I’m completely enthralled about what we have in common,” Hassen says. “And what I think we all have in common are values.”

Hassen came up with the list of 16 values by finding the common threads between focus groups, literature and religious treatises. His decision to stencil in parking spots came from a desire to create “an unexpected message in an unexpected place,” he says. “It’s taking a space that’s not designed for this and turning it into venue for public art.”

Hassen says the city of Chico has contacted him about replicating the project, and he hopes to bring it to communities around the country. Ultimately, to Hassen, it’s not about enforcing a message, but starting a dialogue. “I’m not saying be honorable or be just—I’m just throwing the word out there,” he says. “You can take away from it what you want. It’s to get the wheels turning.”