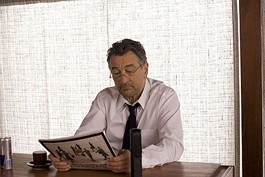 'What Just Happened?' brings Hollywood titans back down to earth

The subject matter of What Just Happened? is perhaps insignificant—a week in the life of a tanking movie producer. But something else happens along the way. Robert De Niro, soulfully underplaying what could have been a broad showbiz farce, makes you care about the producer’s unhappiness. We’ve had Hollywood satires, but has there been a movie about a player at this terminal stage before? Way past the point of taking visual pleasure in film, De Niro’s Ben is just trying to stay afloat. He has no idea whether a movie is good or not anymore.

Director Barry Levinson sketches out the two films that bookend Ben’s week. Ben produced them, but that doesn’t mean he has to think they’re any good. We see the first one, Fiercely, at a sneak preview in Orange County. The bleak little signs with their film titles sticking out above the doors to the multiplex are seen from gurney-eye view, as if glimpsed by a patient rolling to an operating room.

The film, a Sean Penn crime melodrama with a we-are-all-Jesus finale, seems atrocious enough. Penn, in hit-man suit, catches a bullet atop a mountainous coal heap and barrel-rolls down. His faithful pit bull watches as Penn croaks, “Forgive them, Father, they know not what they do.” And then the director breaks a movie rule of such antiquity that the audience is in immediate revolt: The dog gets it, too.

The studio head (Catherine Keener) has the brittle patience of a kindergarten teacher at 2:55pm. If the director Jeremy (Michael Wincott, a weeping tattooed wreck in mid-tantrum) cuts out the bit with the dog getting its brains blown out, maybe they’ll only lose $10 million. Convincing the director to take one for the team, Ben’s other task is to ready a film rolling on Friday. The star, Bruce Willis (as in, Bruce Willis), has gained some pounds and put on a bushy beard, and looks more or less like Jeff Bridges in Iron Man. He, too, is in mid-tantrum, roaring at anyone daring to make him shave or reduce.

Levinson keeps De Niro in constant motion and engaged in Bluetooth conversation, and the surface of the movie intrigues, as a montage of L.A. freeways, a close-up of the mysterious machinery of a luxury car’s headlight as it engages and Ennio Morricone’s “Man with a Harmonica” from Once Upon a Time in the West swirl around Ben on his errands. Ben never comes to rest, not to chat with his second ex (Robin Penn Wright) or with his 17-year-old daughter (Kristen Stewart), from whom he’s becoming estranged.

What Just Happened? is a comedy because that’s the only kind of movie you could call it. Watching an ambitious scriptwriter texting a message at a funeral can make you laugh, but it’s not an intrinsically funny situation; if you actually saw it happen in Westwood, would you really be shocked? The male actors, made to look small and vulnerable, show a lot of their flesh: the sixty-ish De Niro looks fit, though with a small flap of belly (as he downward-dogs it in a yoga pose), and John Turturro paces in fancy drawstring European underwear as he moans like a moose in mid-panic attack on the phone.

The action is fictionalized from Art Linson’s book (in real life, it was Alec Baldwin who turned up for a film looking like Grizzly Adams and who had to be asked to shave). The situations could, ultimately be about any panicky men in any industry, and that’s what makes it stick.