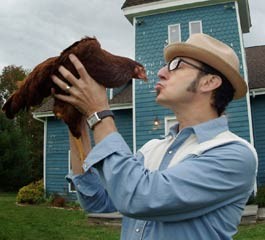 ‘I never put cartoons in there that are just strange for the sake of being strange,” insists Dan Piraro, creator of the “Bizarro” comic strip. “They have to ring some kind of a bell in my head and make me think that they’re interesting enough to publish. And invariably, they ring some kind of a bell in other people’s heads too. There are a lot of people, apparently, that see the everyday, so-called normal world in a very strange way. And they relate to the kind of stuff that I write about.”

Whoever they are, they populate enough major American cities to make “Bizarro” one of the most widely published one-panel comics in the country. Since the comic was first picked up by the Chronicle Features Syndicate in San Francisco 21 years ago, Piraro’s surreal drawings and far-ranging sense of the absurd have found a home in more than 200 newspapers, been anthologized into 11 books, and even spawned a neovaudevillian stage act, The Bizarro Baloney Show, which plays April 19 at 142 Throckmorton in Mill Valley.

“Basically, the show is anything that I think would be fun to do in front of strangers, and maybe make someone laugh,” the personable cartoonist explains by phone from his home in New York. “It’s like a variety show that a 13-year-old kid with a pretty lucrative paper route might put on in their garage.” The Bizarro Baloney Show features original songs, puppet routines, costumes, optical illusions, animations, anecdotes and anything else that comes to mind. “Sort of a multimedia variety show,” he sums up cheerfully, “with just me.”

Piraro savors the one-on-one, face-to face contact with his readers that the live dates provide, and to that end, he’ll be at the Charles M. Schulz Museum signing his new book, Bizarro and Other Strange Manifestations of the Art of Dan Piraro, on April 22. “The worst thing about being a cartoonist is the kind of separation you have from your fans,” he grumbles. “You draw a cartoon, you lick a stamp, you send it off, and six weeks later, somebody 5,000 miles away chuckles at it over the breakfast table.”

In the past few years, his cartoons have become increasingly topical, a shift that has flummoxed some readers and editors. “I’m not supposed to do politics,” he admits. “When a newspaper editor buys ‘Doonesbury,’ they know they are buying a political comic. When they buy ‘Boondocks,’ they know they are buying a socially and politically opinionated hotbed of hate mail,” he laughs. “‘Bizarro’ has traditionally been sold as a cartoon that has an unusual surreal bent to it, oddball humor. They don’t really expect to get a lot of opinion. So when I get overtly political and the editors are swamped with angry mail from the opposite of my opinion, which is invariably the conservative right wing, then they’ve lost the day to answering angry readers that they didn’t expect to lose. So I have to be careful and keep it more in a ‘social foibles of man’ kind of commentary.”

That represents a measure of self-restraint, following some overtly political submissions in 2004. “I was getting very specific during the election year,” Piraro concedes, “but a lot of that was out of desperation. I, like so many other people, was standing there and screaming, ‘The emperor has no clothes. Come on, folks, let’s toss these characters out and put some people in office that can actually handle the job responsibly!’ And, honestly, I think we did that. But the election was skewed in enough tiny ways in enough voter precincts around the country that they managed to literally steal another election.”

But it is another issue–animal rights–that has become Piraro’s most notable political calling card. He traces that back to a single pivotal experience four years ago, when a visit to a farm-animal sanctuary transformed him immediately into a vegan and an activist. “At that place, within one day, I was educated about the hideous and unnecessary cruelties of factory farming. I also met these farm animals–cows, pigs, chickens, turkeys, sheep–in a nonstressed environment where they were allowed to be the kinds of animals that they are supposed to be.

“And I realized,” he continues, “that they are not stupid eating machines that didn’t care whether they lived or died. I saw first-hand that these guys are every bit as sentient and emotional and affectionate and diverse as cats and dogs–and people, for that matter. I realized that my diet and my lifestyle was subsidizing cruelty to the very animals that I was meeting. It was just clearly wrong. All of a sudden this switch flipped in my head, and I thought, ‘I can’t do this anymore.’ I just lost my sense of entitlement over them, and I switched.”

That shift in perspective soon found voice in his work, although not easily. (“Doing humor about animal cruelty is difficult,” he notes.) Soon PETA and other activist groups sought the cartoonist out as a convention speaker, invitations he readily accepted. While Piraro is clearly comfortable in his activist role, it still seems to surprise him, too. “If somebody had told me five years ago that I was going to be an animal-rights activist and a vegan, I would have laughed in their face,” he says. “Back then I thought, like most people, that animal-rights activists were hippies with too much spare time. And I was completely wrong. It’s an authentic movement of people who give a damn and who have discovered how cruel the food industry is, that it’s unhealthy and unnecessary, bad for our health, bad for the environment. It’s just a lose-lose-lose situation.”

For most readers, however, the small upside-down birds, fishtails, pieces of pie, burning firecrackers, alien spacecraft and other icons hidden within the daily panel hold greater fascination than the cartoonist’s political agenda. “At first I did it entirely to entertain myself,” he explains. “And instantly I started getting just floods of e-mails saying, ‘Hey, what’s the deal? Am I the only one that noticed this? Is there a secret to it?’ People wanted it to be something important. So I indulged them. I said, ‘Yeah, it’s a whole big secret, and you’re the only one who knows.’ But little by little I added more and more, because people just enjoyed looking for them. So I put an entire section on my website about the secret symbols and made up nonsense philosophical reasons for what they stood for.”

The artistic antecedent for this is neither the disguised bunny head on a Playboy cover nor the subtle “Nina” of Al Hirschfeld’s caricatures. It’s Highlights magazine for children. “My favorite thing was always the little visual puzzles where they’d have an elaborately drawn scene and then a list of stuff you were supposed to find hidden in the picture. I would go through those endlessly looking for the hairbrush and the shoe and the toothbrush and whatever,” he says. “So it’s a kind of homage to that.”