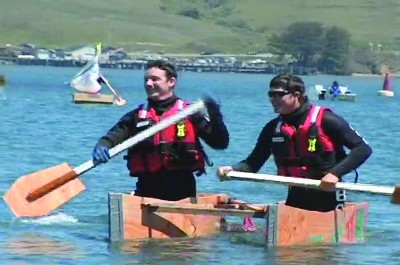 Not only do entrants in the Bodega Bay Wooden Boat Challenge have to build their own sea-craft in three hours using only nonpower tools, they have to sail it, too.

This potentially wet-and-wild coastal tradition is part of the annual Fisherman’s Fest, stretching back 39 years in Bodega Bay. Teams consisting of four members or fewer are given a slim assortment of lumber, screws, caulking and duct tape and, between 10am and 1pm, left to build a boat that hopefully will not sink.

But not everyone can whip up a watertight vessel in one morning, as video footage from the event’s website clearly shows. When the dozens of hand-built ships finally enter the bay to be raced, some capsize right away. For the ones that sink slowly, a CHP helicopter is on scene to rescue waterlogged boaters who have managed to paddle themselves farther out to sea.

Without motors and with hand-made oars, successful contestants race and return to land unsoaked, knowing they’ve braved the salty expanse in something that, only a few hours before, was nothing but a pile of wood and tape. The Bodega Bay Fisherman’s Festival runs Saturday–Sunday, April 28–29, at Westside Park in Bodega Bay. Wooden Boat Challenge begins on Saturday at 10am; race at 1:30pm. Other events include an art show, boat parade, live music and more. For more information, see www.bbfishfest.org.