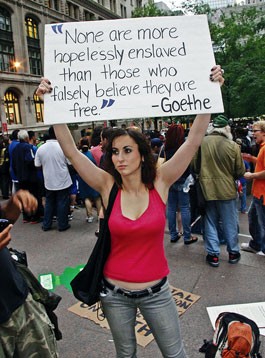 “This movement is going to keep growing. You’ve got millions and millions of pissed-off Americans,” filmmaker Michael Moore predicted at the first occupation of Wall Street Sept. 17. Deepak Chopra, also present, encouraged a spirit of compassion, claiming that the injustices were “created by fear and greed” and that a protest conducted in anger will only perpetrate more fear and greed and anger. “Ask yourself internally,” said Chopra, “What kind of world do you want to live in?”

I can only answer after counting to 10, because injustice always makes me angry.

Solidarity occupation groups are organizing all over the country, from New York to Napa—and, on Saturday, Oct. 15, at 2pm, at Santa Rosa’s City Hall. Whether or not Chopra shows up, if I’m asked what kind of world I want to live in, it’s a world where executives who create a false economic boom face criminal charges. Rolling Stone reported March 3 that of those executives who created “an industrywide scam that involved the mass sale of mismarked, fraudulent mortgage-backed securities,” not one was prosecuted “except Bernie Madoff, a flamboyant and pathological celebrity con artist whose victims happened to be other rich and famous people.”

Pam Silleman, coordinator of the Napa Tea Party, admires the enthusiasm of the protesters. “I think a lot of the issues they have are the same issues the Tea Party supporters have,” Silleman says, adding that Pennsyvania Avenue and Wall Street are on the same team. SocialistWorker.org expressed in an Oct. 3 blog, “Occupy Wall Street and its sister actions around the country have become lightning rods, drawing people fed up with every aspect of a world dominated by the greed and power of the ‘one percent’ on Wall Street and at the top of U.S. society.”

Ali McGee, college senior, is part of the Occupy Humboldt (State University) settlement, where she and a fluctuating population of between five and 45 others have been living since Oct. 1. “We can’t legally sleep on campus or use tents, so we use pop-ups with no sides,” explains McGee. “A few volunteer to stay up and wake everyone when the campus police come by so we aren’t technically sleeping here. We’re working to pass a referendum to be able to stay here indefinitely. It’s cold and dark and rainy up here in the winter, so that ought to say something about the commitment we share.” Farmers bring organic vegetables to the protesters, who are working cooperatively with the University, Veterans for Peace and Occupy Arcata.

“I keep hearing from people who’re frustrated and disgruntled, and they find commonality under this banner,” says McGee. “We’re the 99 percent fighting the 1 percent.”