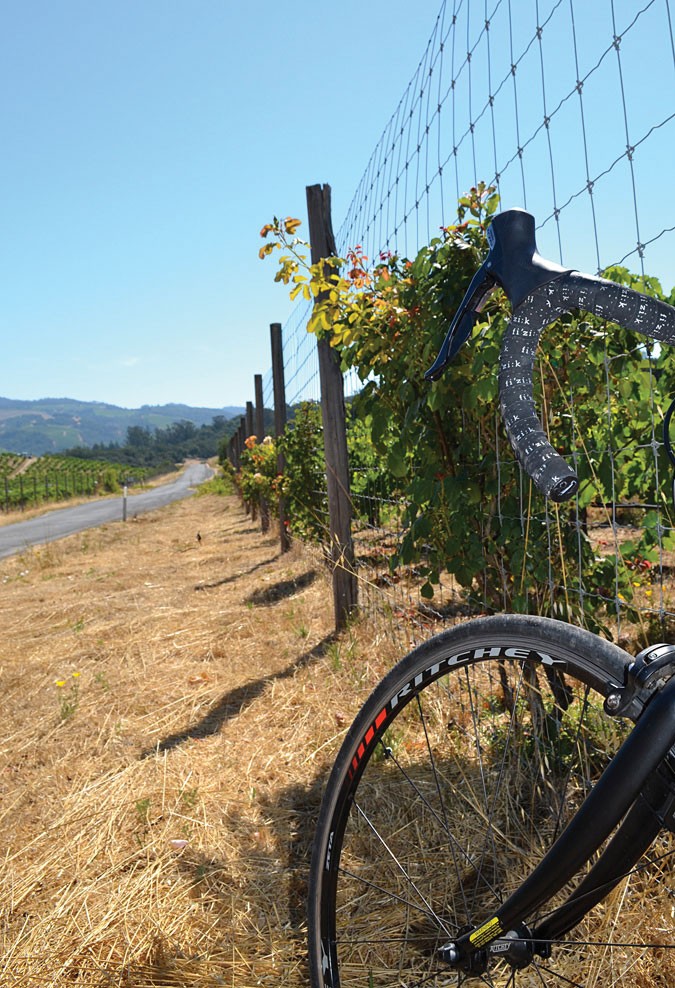 It’s a short ride back in time to Rossi Ranch. One of Sonoma’s surviving vineyards from the old school of field-blended wines, Rossi was planted in 1910 in the back roads above the Valley of the Moon. It’s best rediscovered on a 20-mile bicycle ride.

Let’s begin this two-hour ride at Spring Lake Regional Park, heading out southeast on shady Channel Drive. Back in 1910, a railroad ran along this same route to Sonoma. After a mile plus, look for a turnout on the left and a narrow footbridge and path to Stone Bridge Road. Turn right, and then right again at Oakmont Drive. At Valley Oaks Drive, follow the signs to Pythian Road, and take in a dramatic view of Hood Mountain on the gentle descent to a wide-shouldered stretch of Highway 12.

It’s just under a mile to Lawndale Road. Near the east entrance to Trione-Annadel State Park, the climb begins. This forested area was hit hard by the Nuns fire in October and the route is still in the burn zone when, rounding a bend, bright green grapevines swing into view, backdropped by the mountain vineyards of Kunde to the north. After longtime farmer Val Rossi died in 1999, many of these old vines were rehabilitated, while new Rhône variety grapevines were planted in the traditional, head-trained style.

Watch speed on the steep descent to the left turn at Warm Springs Road. Follow the road into Kenwood, past Kenwood Plaza Park (where wine is allowed at picnic tables) to the signal and back to Highway 12.

Winery Sixteen 600 2014 Val Rossi Hommage Sonoma Valley Red Blend ($64) The Coturri family has a long history with Rossi, and now farm it organically for the current owners. This wine focuses attention with vibrant blackberry juice color, drizzles raspberry syrup over a fanciful aroma image of charred chocolate cookie with oak sprinkles, sweetens a gravelly palate with blackberry licorice and brushes by like dried velvet—soft, but a little grippy.

Carlisle 2015 Rossi Ranch Sonoma Valley Zinfandel ($47) Talk of wine with a “lifted palate” smacks a little of lofty winespeak, until I sip a Zin like this. There’s an herbal character that Carlisle founder Mike Officer calls “Rossi garrigue,” sweet, bright red fruit flavors of strawberry liqueur and maraschino cherry, and then it just sings skyward, not insubstantial, but ethereal all the same—a gift from the last century to the next.