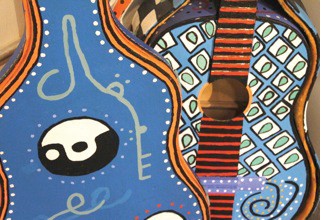 The unique art on display at the Gallery of Sea and Heaven, operated by Becoming Independent, is spreading to new locations this summer.

Becoming Independent is the largest nonprofit services provider for the North Bay’s disabled, and one of is primary programs is ArtWorks. Between the seven studios that ArtWorks manages and the Gallery of Sea and Heaven, participants in the program get many opportunities to express themselves and communicate what they may have difficulty otherwise conveying.

ArtWorks also hosts a show at its own Gallery of Sea and Heaven titled “Hodge Podge” (June 22–Aug. 10; reception, June 22, 5pm), featuring mixed-media pieces in conjunction with the Barracks studios in Santa Rosa.