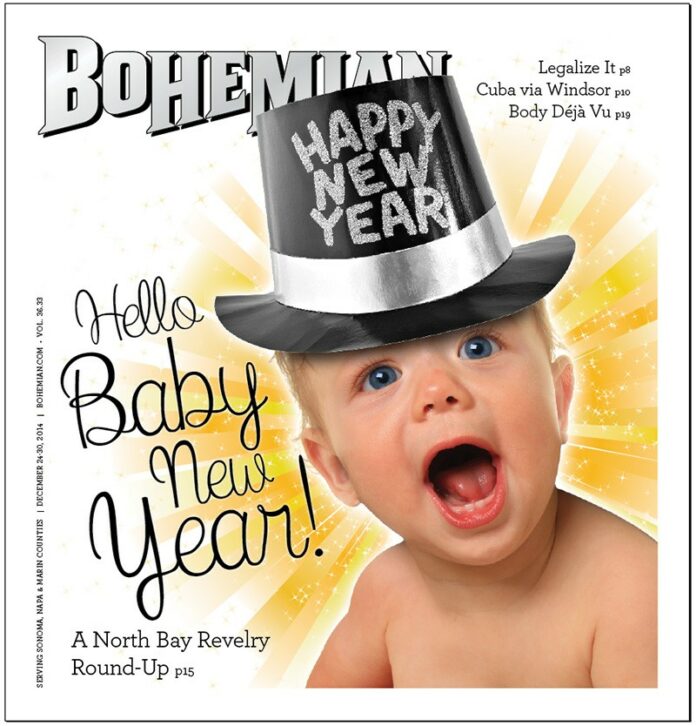 Out with a Bang!

Ring in the new year with lots of laughs at the all-comedy cabaret with Sandy and Richard Riccardi at 6th Street Playhouse in Santa Rosa. The Riccardis riff on menopause, social consciousness and their cracked road to marital bliss at 7pm ($25) and 10pm ($40–$50). 52 W. Sixth St., Santa Rosa. 707.523.3544.

Dance in the new year at the Flamingo Resort. Party in two rooms of music and dancing, with a special reunion performance of Crossfire in the Grand Ballroom. Top DJs include DJ Don Dada and DJ JMag in the Lounge, spinning continuous dance tracks before the countdown ball falls. The event features a cash bar, and tickets are available online or at the door for $55. Doors at 8pm; show starts at 9:30pm. 2777 Fourth St., Santa Rosa. 707.545.8530.

Get bluesy this New Year’s Eve with Tommy Castro and the Painkillers at the Mystic Theatre in Petaluma ($41). This guitar-driven blues band is known for putting on a great show, and there will be a special guest performance with Keith Crossan and Nancy Wright. 23 Petaluma Blvd. N., Petaluma. Doors at 8pm; shows starts at 9pm. 707.765.2121.

Get a leg up on your New Year’s fitness resolution with the Jack London State Historic Park in Glen Ellen on Jan. 1. As a part of the national “First Day Hikes” movement sponsored by America’s state parks, the free event will be offering a series of hikes for all fitness levels this year that take hikers through the mixed evergreen forest up to a summit offering sweeping vistas of Sonoma Valley for the more experienced. 2400 London Ranch Road, Glen Ellen. 707.938.5216.

For those looking to end the year with some serious groove time, swing by HopMonk Sebastopol for “Brainstorm New Year’s Eve: The Time of our Minds” event from Daniel K Presents. The event will feature multi-genre dance music, hip-hop and dub-step with performances by Wick It, Stylust Beats and more. This high-energy celebration starts at 9pm and is 21 and over. $30 early bird; $35 advanced purchase; $40 at the door. 230 Petaluma Ave., Sebastopol. 707.829.7300

Hip-hop is not forgotten in Sonoma County this year with New Year Steeze at the Whiskey Tip in Santa Rosa. A-Plus and Casual from Oakland’s legendary Hieroglyphics crew will perform, and well as M.C. Radio Active and more, killing it with conscious hip hop, indie rap, and electronic music all night long. With a complimentary whiskey toast at midnight, the event is $20 pre-sale online and $30 at the door. 8pm–2am. 1910 Sebastopol Road. 707.495.9351.

Jazz lovers, ring in the New Year at Guerneville’s Main Street Station with artist Frankye Kelley, a Grammy-nominated singer who will perform a series of jazz standards as well as a few familiar blues tunes. $20–$35. This venue also has a dining option before the show. 16280 Main St. 707.869.0501

There’s sing-a-long music at Redwood Cafe in Cotati. The evening starts with the crowd singing Beatles hits at 8pm with lyrics provided (free), and at 9:30pm the dancing starts with the GrooveMatics ($10). Get ready for classic rock, Motown, and the blues. 8240 Old Redwood Hwy., Cotati. 707.795.7868.

Enjoy some R&B and rap this New Year’s Eve at the Tradewinds in Cotati. DJ J.Lately will be headlining, and getting everyone ready for a midnight toast. No cover charge. 8210 Old Redwood Hwy. 707.795.7878.

For something different, explore the life and times of Edith Piaf in Cinnabar Theater‘s play Edith Piaf: Beneath Paris Skies. This performance recreates Piaf’s unlikely road from the brothels of Paris to stardom in the 1930s. Musical accompaniment by a five-piece band completes the experience. On New Year’s Eve only, enjoy desserts before the show, party favors and a Champagne toast at midnight. $55–$65. 3333 Petaluma Blvd. N., Petaluma. 707.763.8920.

Dance and laugh into the new year with Danny Click & the Hell Yeahs and Jude Johnstone at the Throckmorton Theatre in Mill Valley at ($40–$70). Keep the fun going on New Year’s Day with some of the funniest comedians around: Will Durst, Johnny Steele, Debi Durst, Michael Bossier, Mari Magloni and Arthur Gaus at 8pm. $21–$25. 142 Throckmorton Ave., Mill Valley. 415.383.9600.

Laughs abound at the Fifth Annual New Year’s Eve StandUp Comedy Celebration at the Osher Marin Jewish Community Center in San Rafael. This year the event boasts five comedians in one night, including headliner Don Gavin. The night kicks off at 7:30pm with a no-host cocktail party and continues on to a NYE Champagne toast at midnight with the comedians. The event doubles as a canned food and coat drive for SF-Marin Food Bank and One Warm Coat, so bring along nonperishable foods and warm lightly used or new coats. $33–$37. 200 N. San Pedro Road, San Rafael. 415.444.8000.

There are even more opportunities to laugh at the annual Best of the San Francisco Stand-Up Comedy Competition at the Marin Center in San Rafael. Featuring a variety of performances by the comedy competition alumni, the show starts at 9pm. $35. 10 Avenue of the Flags, San Rafael. 415.473.6400.

Brooklyn-based band Pimps of Joytime play at Sweetwater Music Hall in Corte Madera at the annual NYE celebration. Their sound is completely their own unique blend of including Afrobeat, rock, hip-hop and electronica. Tickets include a Champagne toast at midnight, and VIP tickets include a dinner of locally sourced, seasonally driven and organic foods sure to delight the palate with worldly flavors. $47–$102.
19 Corte Madera Ave, Mill
Valley. 415.388.3850.

Get ready to rock with the Unauthorized Rolling Stones at George’s Nightclub in San Rafael. This New Year’s Eve bash not only has good tunes but a Champagne toast at midnight and a guaranteed good time with the club’s two-drink minimum. (Does the Champagne count?) $35. Check out the reserved seating option. 842 Fourth St., San Rafael. 415.226.0262.

If you love good beer and classic rock, spend your last hours of 2014 at HopMonk Novato, listening to the sweet sounds of Rock Candy as they treat the audience to some classic rock covers. HopMonk also switches things up by treating guests to an IPA toast at midnight. $25–$30. 224 Vintage Way, Novato. 415.892.6200.

Beso Negro rings in the new year with style and passion as they perform their gypsy jazz and “swing gigante” covers. This will be a band to dance to well into the night at Peri’s Silver Dollar in Fairfax, starting at 9:30pm. $20.
29 Broadway, Fairfax. 415.459.9910.

If the sounds of Prince are more your style, spend New Year’s Eve at Fenix, where the Prince cover band the Purple Ones will be performing and the prix-fixe menu will be available for two separate time slots. The early bird seated dinner and show goes from 5:30pm to 7pm with a Champagne toast ($75), and the all-night version runs 8pm to 12:30am ($125). There are also options for seating at the Back Bar for both performances. 919 Fourth St.,
San Rafael. 415.813.1234.

The Harvest Inn‘s New Year’s package with Goose and Gander provides a guaranteed reservation at the annual party, this year featuring pianist Bob Ringwald, and a late-night DJ. Upon arrival each guest receives a bottle of sparkling wine and five-star accommodations within the hotel. 1 Main St., St. Helena. 707.963.9463

Silverado Resort offers an array of celebrations to ring in 2015, including a four-course meal at the Grill or a prix-fixe menu at the Royal Oak, the Gary Mule Deer music and comedy show and finally the fourth annual New Year’s Eve Extravaganza. The final event will feature dancing, party favors, a balloon drop and a cash bar. 1600 Atlas Peak Road, Napa. 707.257.5431.

Do it up big this New Year’s Eve with Celebrate! Napa Valley’s all-inclusive event in Calistoga. This means your choice of a $50 voucher to a variety of Calistoga restaurants, a shuttle service from downtown to the Napa Valley Fairgrounds where the party gets going with an open bar, a dessert bar, late-night snacks and music from Night Fever. Enjoy a glass of Shramsberg sparkling wine at midnight before the shuttle delivers you safely to your Calistoga destination. $150 for the package, $100 for party only. 1435 N. Oak St., Calistoga. 707.942.5111.

The Meritage Resort and Spa celebrates New Year’s Eve with plenty of options including a multi-course meal at Siena ($95), a ballroom celebration, a Champagne toast at midnight and live music by the Brian Cline Band ($60). A VIP Lounge upgrade option with bottle service and small bites, or even a combination of all of the above is also available. 875 Bordeaux Way, Napa. 844.993.9628.