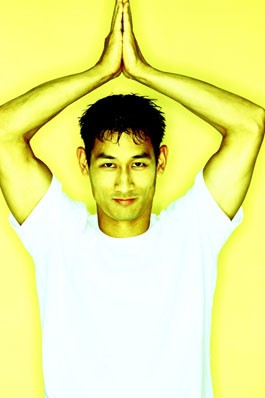 Out & About: Ubuntu in Napa

The scene, the yoga, the beauty folks, the single canape.

It’s a sign of success, I suppose, when the turnout for the VIP grand opening party of a new restaurant is so well attended that the guests are packed in like sardines who enjoy sipping pricey sparkling wine, fishies dressed to the nines in fancy summer finery.

Such was the case at the invitation-only gala celebrating Ubuntu, the restaurant sensation that opened in Napa last week. By the PR folks’ calculations, and judging by the number of elbows that dented my rib cage as I tried to circulate, more than 400 of the Bay area’s elite pressed themselves into the chic and compact dining room that used to be a furniture store next to the Annalien Vietnamese cafe.

We clogged the back patio, we spilled onto the street and we jostled our fab selves to get wine refills from devastatingly young, handsome bartenders.

Mostly, we struggled to snag hors d’oeuvres from platter-bearing servers who taunted our grasp like dandelion fluff in a storm. Despite the eight chefs working the exposition counter, crafting exquisite-looking dainties of foamed this and shaved that, those waitresses were slippery as EVO oil. Even after I parked myself squarely at the service counter, in fact, the only thing I trapped was a postage stamp of curried something on toast, passed hand-over-head to me from a brave friend buried in the throng.Why the crush? Ubuntu is not simply a restaurant, but a self-described “community-focused mission,” that feeds us while striving to foster “humanity toward others” while “reducing its carbon footprint in the world.” And, oh, it’s a yoga studio, too. It’s true: the open-to-the-dining-room studio upstairs was writhing with Cirque du Soleil—trained contortionists hired for the evening to challenge physics and hype the daylong classes soon to be offered.

Now, if this were simply a hippie dive, I doubt if there would have been any frenzy, but Ubuntu has big names, with apparently buckets upon buckets of cash behind it, and who won’t party on a concept like that? Ubuntu refers to a South African humanist ideology focusing on people’s allegiances and relations with each other. At least that’s what owner Sandy Lawrence, gowned in glittery gold, tittered to us from her second-story perch overlooking the crowds.

It’s got an important roster of kitchen talent, led by chef Jeremy Fox, a Johnson & Wales grad who’s cooked with Gordon Ramsay and was previously chef de cuisine at Manresa of Los Gatos.

The theme is high-end vegetarian—in a pro-veggie rather than anti-meat way, we’re told—with most of its daily-harvested organics coming from its own biodynamic gardens (planted by former COPIA curator Jeff Dawson, no less). Mmm, that means treats like homemade fideo with chanterelles, speckled romaine leaves, lettuce fondue and Cubeb pepper.

But truly mmm? I don’t really know. After an hour of being trampled, with nary a precious peanut to pop in my mouth, I fled, the Ubuntu chant of “humanity toward others” ringing in my ears.Make that: hungry, hungry humanity.

Hours: Currently open for dinner; breakfast and lunch are coming, but the restaurant isn’t ready to commit to a date yet.