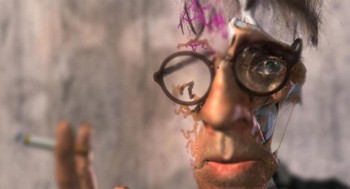 Portrait Of The Artist: Chris Landreth’s ‘Ryan’ shows characters disfigured by their emotions.

Oscar shorts get there in record time

A lot can happen in 15 minutes. Children can become terrorists, Nazi-smashers can save the world and even gophers’ lives can be made all the more interesting. This year’s crop of Oscar-nominated live-action and animated short films, showing from Feb. 25 at Rialto Cinemas Lakeside, cover all this and more across eight distinctive works.

There are several ways a creative filmmaker can approach the time constraints imposed by the short-film format. One method is certainly the “clever idea” strategy, where a filmmaker uses one good idea, visually or verbally, that is not strong enough to carry a feature but is a damn good idea nonetheless. This is the battle plan of Spanish filmmaker Nacho Vigalondo’s live-action 7:35 de la Mañana, a work that is as simple as it is charming. When a routine-oriented woman enters her regular coffee shop as she does every morning at–you guessed it–7:35, she finds that a quite different experience than normal is in store for her. What follows is an eight-minute film with a strong sense of whimsy.

Two Cars, One Night, another live-action piece, successfully blends high style with a character-driven story. Brilliantly photographed and intelligently framed, this slice-of-life work also ably demonstrates the acting prowess of its young stars. The black-and-white noir-ish look of the film does not distract from the wonderful performances of a pair of young boys and a girl. Though their thick New Zealand accents make them hard to understand at times, their naturalism more than makes up for it.

The live-action Indian film Little Terrorist, utilizing tension and scenario to great effect, is the most featurelike of the bunch, despite its brief 15-minute length. When a young Pakistani boy sneaks across the border into India to retrieve a lost ball, he is quickly on the run from violent border guards. Seeking refuge with an elderly schoolmaster who happens upon him, the boy learns about the ways of India during his brief time there.

Rex Steele, Nazi Smasher, this year’s student winner for animation, is an homage to the pulp serials and propaganda-like war films of the 1940s and succeeds on many levels: as clever tribute, laugh-out-loud comedy and, if nothing else, good-looking cartoon. The only traditionally animated film of the program, Rex Steele manages to stay as interesting as its computer-created counterparts, helped along by healthy dollops of comedy.

Without a doubt, the standout of this year’s Oscar shorts is the stunning Ryan from Canadian director Chris Landreth. Ryan is a shining example of animation: original, daring and unequivocally fascinating. Ryan reinvents the nonfiction documentary as an animated biography, turning its lens (or is it a keyboard?) on influential Canadian animator Ryan Larkin.

Larkin, an animator who rose to fame in the late ’60s and early ’70s and was himself an Oscar nominee, is now an alcoholic and recovering drug addict living on skid row and begging for change. He hasn’t created any new work in decades. Through interviews with Larkin and several of his friends and confidants, Landreth attempts to solve the mystery of how one of Canada’s greatest and most promising cartoonists could sink to such a level. Landreth visualizes his characters as literal interpretations of how they seem to feel–missing chunks of themselves, fading away and carrying the sorrows of life all over their animated visages. This is a director to watch, one gifted with brilliance, a unique vision and the tools to match.

While each work in the program is satisfying in its own right, not all manage to be irrefutable triumphs. Gopher Broke, for instance, the opening Pixar-style CGI piece, is a solid and detailed piece of computer animation, but this is the sort of thing seen–and done better–many times before.

Birthday Boy is even more breathtaking in its animated style, taking exciting chances with its selection of shots and angles, though the simple, meandering story of a young boy playing war in 1950s Korea could prove to be a bit too subdued for audiences.

The final selection, a 25-minute live-action film from Britain called Wasp, is an example of the gritty realism that many directors use the shorter format to capture. But the piece is also relentlessly depressing, tends to drag on with its longer-than-most running time, and is distractingly shaky with its handheld camera technique. The acting is surprisingly realistic, but the look and pacing of the film just don’t shine as the performances do.

Taking the good with the not nearly as good, this collection of shorts is still well worth the price of admission. Whether one goes for the fun of Rex Steele, the eccentric sensibility of 7:35 de la Mañana, the brilliance of Ryan or even the CGI wonder of Gopher Broke, there is something for everyone at this year’s collection of Oscar shorts.