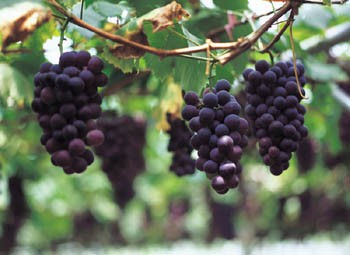 Ancient ways are the next step in organic winemaking

While it’s widely accepted that we Californians can be kooky when it comes to our liberal views on politics, the environment and the application of tattoos, many of us may not be aware that some of the most well-known and respected winemakers in the area plant their crops by the light of the moon, bury ancient cattle horns in specific “energy spots” in the vineyards and open up the floors in their barreling rooms so the earth’s gravitational forces can better meld with the wine’s energy.

Sound like a lot of mumbo-jumbo? Well, according to many winemakers and agriculturalists worldwide, biodynamic farming takes up where organics leaves off.

Biodynamics, a holistic farming approach developed in the 1920s by Rudolf Steiner (the Austrian philosopher who created Waldorf education), encompasses many of the principles of organic farming, such as the elimination of all chemical inputs, but goes even further. Biodynamics aims to bridge the gap between the material and the spiritual worlds through a closed, self-sustaining ecosystem where all agricultural byproducts are returned to the earth (thus eliminating the need for chemical fertilizers), which creates a natural habitat for predators (thus eliminating the need for chemical pesticides). While biodynamics isn’t a farming method limited to grape-growing, it is consistent with France’s Appellation Origine Controlée, the benchmark of excellence in France. And an increasing number of North Bay wineries are embracing the method wholeheartedly.

Bob Benziger, customer-relations director of Benziger Family Winery in Sonoma, says, “One of the biggest differences between biodynamics and conventional agriculture is the focus on plant growth both above and below the soil. Farming practices that penetrate deep into the soil with water, air and nutrients foster strong root growth that transfer elements from each layer of soil strata to the fruit, creating a strong sense of place that the French call terroir.”

While not French enough to properly roll the r‘s in “terroir,” the Benzigers certainly have their principles down pat. Stewards of their 85 acres on Sonoma Mountain for more than two decades, this family seeks to “exalt rather than exhaust natural resources,” Benziger says. “Really, the climate and the soil dictate what we grow here. The most important thing you can ever do is pick the right spot and put the right varietal on it.”

Benziger says, “We get away from putting unnatural chemicals into the ground. We don’t use any fertilizers that are chemicals, no pesticides or herbicides. Then we try to recycle everything we use here: water, vineyard waste, landscaping waste and winery waste. We make our own compost. We have a closed system, bringing no outside inputs. We try to keep the originality or the authenticity of this vineyard, recycle all the inputs that come out of here in a way that’s not to fertilize the ground but to revitalize it.”

While there are hundreds of “little things along the way” that comprise a biodynamic farming method, Benziger says, the winemakers focus on creating self-regulating systems, applying biodynamic preparations, working with the cycles of nature and, perhaps most unusual of all, paying attention to what the vintner terms “life force.”

Cover crops between the vineyard rows act as natural fertilizers as well as “highways” for the bugs and animals to move out on. Each block of grapes might have a different cover crop: clover, grasses and flowers are most often used. In the summer, cover crops are pruned low so they don’t compete for moisture with the vines. “We want everything to work within a smaller [grape] canopy, which is a smaller ‘combat zone’ where balance and diversity will take place,” Benziger says.

The movement of the sun, the changing seasons and the lunar cycles are all connected intimately in a biodynamic vineyard. “Timing farming activities to align with the rhythms of nature maximizes the natural energies and special qualities of a location,” says Benziger. For instance, careful farming practices and the correct selections allow a plant to align its key activities with the cycle of the sun. In biodynamics, spring equinox is for bud break; summer solstice, for bloom; fall equinox, harvest; and winter solstice, the silence of dormancy.

“Really, it’s just working with Mother Nature,” Benziger continues. “And then understanding how those cycles of the solar system affect the vines from bud break to bloom to veraision to harvest.”

One differentiating principle of biodynamics is that it tends to look at the whole picture of agriculture, both above and below ground. In the spring and summer, the focus is above-ground, on the leaf canopy and eventually the fruit. Once the grapes are harvested, root health and care below-ground become the focus.

“Once we pick, our way of thinking changes completely,” he continues. “October comes, November, December–we’re thinking underground: revitalizing, root growing. It’s amazing how we change; we transition with the solar cycles.”In its largest sense, biodynamics is the practice of enhancing and connecting energy sources into a holistic system. On the Benziger ranch, the grapes connect to the universe through the sun, which drives photosynthesis into the vines. “And they connect to the universe through a complicated root system,” Benziger says. “The more diverse and connected a system of microbes, animals and plants are on a piece of property, the more likely they will give patterns a rhythm through the emissions from the energy field specific to a place.”

One way Benziger connects its wines to the energy field specific to a place is in the barrel cave. The biodynamic wines (not all of Benziger’s wines are biodynamic) are kept in oak barrels directly above the open ground. This is no small feat The gigantic caves are a complex labyrinth of passages, filled with the cool smells of aging wine and oak, and the open spaces had to be placed carefully so as not to damage the structural integrity of the underground domain.

Of the three-foot-wide, 10-foot-long gravel-filled open spaces beneath many of the barrel rows, Benziger says, “there’s unique personality in those places on this land. We are creating environments along the way, from vine to bottle. We create the systems and the environment, but let it work for itself.”

But why are the barrels stored above the open ground? Well, when a natural high-pressure system comes by, gravitational forces in the earth are forced down powerfully. If the wines are kept directly over these energy spots, solids in the barrel are forced down into the lower part of the barrel. When the wine is racked (the juice is siphoned off the sediments that have settled to the bottom of the barrel), it often doesn’t need to be filtered or fined.

“Biodynamically, we’re creating a gravitational ebb and flow in here, which helps us mix up the wine more,” Benziger says. “We can be involved less and let the wine make itself as much as possible.”

To maximize the potential of the hillside vineyards and the volcanic soils, the Benzigers focus on certain biodynamic preparations to help the crops along. The homemade preparations are concocted to “regulate and stimulate the life processes in the grapevines, connecting them to the site,” Benziger explains.

The treatments are considered homeopathic, because they “initiate the release of energy, and not matter.” The preparations are catalysts that trigger biological activities “aimed at bringing the right energy at the right time to the soil and the plant,” he adds.

Cow manure humus Made by filling cow horns with cow dung and burying them at the autumn equinox. Mixed into water, this is sprayed onto the vineyard floor just before sunset in the fall after harvest; a timing that coincides with the root-growth activity of the vine.

Ground horn silica Cow horns are this time filled with ground quartz and buried at the spring equinox. Uncovered in warming months, the quartz is then mixed into water and misted into the air at sunrise during the summer and just before harvest to make light more efficient for photosynthesis. The effect is to increase color, flavor, aroma and the shelf-keeping qualities of the grapes.Yarrow Aids absorption of important trace elements.