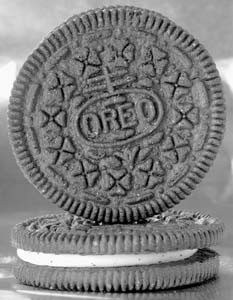 Sure, the Oreo boasts a lively history, but is it really Santa’s favorite cookie?

‘TWAS THE NIGHT before Christmas and all through the house, not a creature was stirring . . . except for that large red-cheeked intruder scarfing Oreos at the dining room table. Yes, that would be Santa Claus, the ultimate cookie fan, who, according to millions of Christmas-giddy parents, just wouldn’t feel properly thanked–after sliding down the chimney and slipping toys beneath the tree–if the children of the house did not leave him some sugary baked bribe and a glass of milk.

Historians are uncertain as to the exact inception date and origin of this odd, socially sanctioned Cookies-for-Presents Program–or should we call it a “tradition”?–but it seems to have originated sometime around the late 1930s. And yes, in most households that follow this custom, the cookies are less of a bribe–by Christmas Eve it’s really too late to change Santa’s mind anyway, isn’t it?–than a generous, blissful, heartfelt “Thank You,” a thoughtful offering to a kindly fellow who works awfully hard on Christmas Eve and must surely need a snack somewhere along the way.

To put it more specifically, is Santa a chocolate-chip cookie man or does he go in for those tree-shaped festive sugar cookies? We may never know, but–and this may shock you–there is a body of evidence to support the conclusion that the one cookie that is left for Santa more than any other cookie . . . is the Oreo.

Yes, the Oreo. The bread-and-butter of Nabisco Foods Inc., that renowned little treat made of sweet creamy “filling” stuffed between two chocolate circles. Based on the sheer number of Oreos sold around the world, the folks at Nabisco can rightly claim that the Oreo is the most popular over-the-counter cookie in the world: over 363 billion of the things have been gobbled up since they hit the market in 1912–enough Oreos to reach to the moon and back five and a half times, enough to circumnavigate the globe 382 times!

And since the cupboards of America, statistically speaking, are more likely to hold a box of Oreos than any other cookie, it could be extrapolated that Santa finds a higher percentage of Oreos waiting on the table than any other brand.

“One would definitely think so,” agrees Ann Smith, spokesperson for Nabisco Foods Inc., headquartered in Parsippany, N.J. “We can’t officially claim to be Santa’s favorite cookie, of course. But since we’re America’s favorite cookie, I’m sure Santa gets plenty of Oreos every year.

“If I ever get a chance to speak to Santa, I’ll ask him,” remarks Smith, adding, “I also want to ask him if he’s a twister or a dunker.”

Oh! Surely Santa is a dunker. Isn’t he?

“Most males are,” Smith replies. “Our research shows that women tend to be twisters, and men are dunkers. Men also tend to pop Oreos in their mouth whole, and guzzle milk to wash them down.”

Hmmmm. Since Santa is always on the run, maybe he does that.

THE NOBLE OREO–as illustrious and recognizable a brand name as are Lifesavers and Spam–is consumed at the rate of 9.1 billion cookies per year. Like Spam, the origin of the Oreo’s peculiar name has been the subject of endless speculation. (Spam, in fact, is a conflation of the words spice and ham). According to Nabisco historians, the Oreo was not named after the Greek word oreo, meaning “mountain.” Nabisco’s pride and joy was named by taking the “re” out of cream and squishing it, sandwich-style, between the two “o’s” from the word chocolate.

The original Oreo has, over the last 87 years, produced a number of Oreo cousins, including a popular white fudge-covered Oreo and a bevy of holiday-themed Oreos, spanning the calendar from Christmas to Purim.

In fact, it was just in time for the Jewish holiday of Purim that Nabisco, two and a half years ago, introduced the spring Oreo, made with sky-blue filling, and carrying–for the first time in Nabisco history–a stamp on the package announcing that the contents were 100 percent kosher. Since then, all Oreos–and nearly all Nabisco products–have been certified kosher.

Which leads to the obvious question: What was it about Oreos that wasn’t kosher?

According to Smith, the cookies were once made with lard. As in animal fat. But that’s all changed. In fact, from an ingredient standpoint, Oreos haven’t actually contained lard since the ’70s. But since Oreos were still being produced on the same production lines, the product could not be considered kosher. Systematically, one by one, Nabisco disassembled the machinery, cleansing everything according to the requirements of the faith so it could receive a rabbi’s blessing. The sky-blue color of the spring cookies was chosen to suggest, well, the spring.

Besides, she adds, “Red is Santa’s favorite color.”

So does that suggest that Mr. Claus might prefer those red cookies to the original? Smith does not to presume to say.

“At our house, we leave the white fudge-covered Oreos,” she confesses. “Mainly because those are my favorites.”