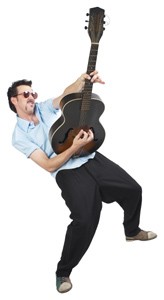 It’s only July, but it’s not too early to declare that the best CD of the year features the song “I Spent $600 Text-Messaging Votes for Bo Bice and All I Got Was This Cheap Simulated-Leather Cell Phone Pouch.” Unfortunately, you may never get to hear Ordinary Guy (Burbs), the quirky collection of contagious pop that All Music Guide has lauded for its “sun-kissed melodies.”

Wal-Mart, the world’s largest retailer of battery-powered Chicca Vespa motor scooters for two-year-olds, has complained that the singer-songwriter formerly known as Todd Gusto fails to understand that simulated-leather cell phone pouches and other quality items manufactured in China by political prisoners are a cornerstone of the U.S. economy.

Consequently, the entire inventory of the CD has been stuffed into a scorching hot shipping container bound for New Guinea, where the record label hopes highland subsistence farmers deep in the island’s Stone Age interior will embrace such heady concepts as air conditioning and microwaveable pizza pockets.

Yet just a few years ago, the singer was dating Angelina Jolie, hosting celebrity poker tournaments and anticipating that his campaign to rid the world of the sore thumbs of compulsive video gaming might put a Nobel Prize on the mantle of his Malibu beach home.

Of course, Mother Jones dashed those hopes when it revealed that he had invested in a company that sold defective sweatshop Pacboys to poor kids in India–no need to rehash that fiasco. But he hadn’t let the episode get him down; he decided that it was time to experience firsthand the deprivation of the world’s poor, hungry, miserable masses.

He spent three weeks snorkeling with dolphins around Kapalua Bay in Maui, where he had what he would later describe to E! Online as “an epiphany.” The resulting album, written while experiencing the savage deprivation of the Ritz Carlton Kapalua, where the Hawaiian fresh fruit medley is unavailable after 11am, enjoyed a huge rollout by the record label. Their accountants, however, made it clear the CD would have to garner “a significant market share of the lucrative 11- to 14-year-old audience” and send Nielsen Soundscan numbers “through the roof.”

All Music Guide, which had lauded his sophomore effort as “a surprising turn toward hedonistic maturity,” dismissed the new disc as “a murky mess of forgettable material.” He blamed his fiancée, a spoiled supermodel who had balked at the suggestion that they wed at an Antarctic Adelie penguin research station two weeks before the CD release.

A cheap commercial ploy, she called it. A powerful environmental statement, he retorted.

The wedding was off, the CD bombed and invitations to join Madonna’s kabbalah study group fizzled.

He moved back in to his parents’ home in Mayfield Heights. Where the fuck is Mayfield Heights? his jaded Hollywood friends asked. None of your business, he replied, certain that the modest split-level outside of Akron would become the butt of their cruel, hip humor.

And after a year of following the rules and helping to make Mayfield Heights “the kind of hometown we all expect it to be,” as the town’s website extols, Gusto settled down, got married, had kids. He forgot all about hot-tubbing with blink-182, chasing down sleek Tasso Elba “Donatella” tasseled driver mocs and the curiously sensuous taste of a fine Tabacalera Esteli Cuban cigar.

Then, while attending a fifth-grade talent show where a precocious girl crooned heartbreaking songs of honky-tonk lust and despair, he tapped into the American suburban Zeitgeist.

Back at home, he put Bic pen to binder paper. The songs flowed like water through an automatic lawn sprinkler: “Karen Gives Good Car Pool,” “BBQ for Me and U,” “Ain’t No Cure for the (Mom Didn’t Pack an Extra Pillow for My) Summer Camp Blues” and “Sweet Home Equity.”

His old label saw the chance to reach the elusive soccer moms and NASCAR dads that put Bush back in the Oval Office. They agreed to pick it up to satisfy his contractual obligation.

Then Wal-Mart weighed in.

Will you ever get to hear this masterpiece of mediocrity? Only if the “primitive” wantoks of Papua, New Guinea, take the disc to their collective bare bosom and post it as downloadable mp3s on their website.

For more information about ‘Ordinary Guy,’ or to chat with a befeathered ‘wantok,’ visit www.niugini.com/pngonline.