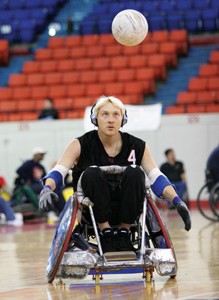 If Mark Zupan had it to do all over again, he’d still want to be a quadriplegic. The former high school soccer star lost the use of his legs when he slept off too much drink in the back of his best friend’s truck after a party. Not knowing that Zupan was passed out in the back, the friend beerily poured himself into the driver’s seat, took to the road and promptly hit a light post. Zupan was shot from the truck bed into a ditch, where he hung, broken, on a tree limb for over 14 hours. He’ll never walk again.

But Zupan will ride. Now the spokesman for the U.S. Paralympic Rugby Team, he has long since given up the hope that his legs will come back. And when outfitted on a Mad Max-like sports wheelchair that is dinged and pitted and ferociously lean, its wheels covered with what appear to be garbage can lids, he’s as athletic and determined as he might ever have been as a teenaged soccer star. Perhaps more so.

Zupan and his teammates play quad rugby, the toughest, the raunchiest, the most extreme form of professional sports for the disabled that exists. Called “murderball” by the Canadians who coined the name, the men race around what appears to be an indoor basketball court slamming viciously into each other’s chairs, toppling one another over as they engage in murderous competition.

Documentary filmmakers Henry Alex Rubin and Dana Adam Shapiro were both supremely lucky and supremely smart in filming the story of the U.S. Paralympic Rugby Team as it prepared for the 2004 Paralympics in Athens. Primarily following Zupan and his teammates Andy Cohn, Scott Hogsett and Bob Lujano, their resulting film–naturally enough called Murderball–contrasts the efforts of these Americans with their former teammate Joe Soares, who has left the team to captain the Canadians.

Soares, a polio survivor who has been crippled since childhood, has played quad rugby since the ’80s and mostly resembles Robert Duvall’s rabid character from The Great Santini. Called a traitor for defecting to the Canadian team by guests in his own home, Soares is saddled with a sweet, unathletic son, the kind of boy who plays violin and is teased by the other kids for being too smart. Scrappy, competitive Soares was never that kind of a kid himself, and he appears mystified and irritated at the boy. A life-changing event captured by the cameras also finds Soares changing his attitude toward his son, a small relief in a film that is all about the many bad things that can happen to the young.

Indeed, Murderball should be requisite viewing for any teenager who intends to drive regularly, have friends, go to parties, share germs or sleep it off because, in the ordinary course of things, one can be thrown off the porch at a party (Hogsett); contract a sudden rare and virulent blood disease (Lujano); be the victim of drunk driving (Zupan); or simply be in the wrong car at the wrong time (Cohn). Sometimes, of course, it takes a war or a motocross competition.

The filmmakers follow Zupan as he mentors new quads, focusing particularly on rider Keith Cavill, the kind of young man who grew up on ATVs, graduated to dirt bikes and ended up on a big, powerful motorcycle that eventually cost him the use of his legs. They also visit a military hospital specializing in rehabilitating Iraq war veterans, painfully young men and women who want to know when they’ll walk again. Cavill asks Zupan whether he’ll have to give up quad rugby “when” he walks again. Zupan keeps a composed face and agrees that, yeah, giving up quad rugby would be the sacrifice.

Learning to give up the able-bodied life and embrace the differently-abled life is the key component that the professionals in Murderball share. These are extraordinary young men: handsome, intelligent, athletic, driven and deeply mature. From their own admissions, they mostly weren’t any of those things before their accidents forced them to embrace what life offered, regardless of its packaging.

As the team nears Athens, the film’s pace intensifies until the audience is once again kicking itself for having overlooked the Paralympics coverage last year. Frustrated by being often confused with the developmentally disabled athletes who people the Special Olympics, Andy Cohn grits out, “We didn’t come to Athens to be hugged; we came to win.”

In Murderball, at least, they do.