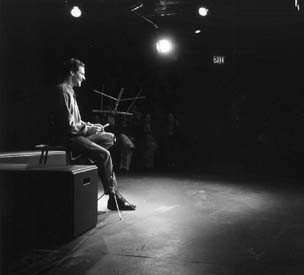 ALLITERATIVE swear words are fired from the stage like fusillades from an angry rifle. The 40-odd audience members, in attitudes ranging from beat nonchalance to literary ecstacy, absorb the spoken-word rant with easy aplomb. On stage, the young woman in the brown corduroy jacket is just warming up, hips rolling in time to her verbal jabs, a radiant mist of sweat emerging under the bright theater lights.

The new poetry slam night at Santa Rosa Actors’ Theatre, scheduled for the second Monday of each month, is going well. The leisurely open-mike period has set the tone as “rowdy casual,” and the shoot-from-the-hip energy of the poetry slam fits right in, pitting artists’ on-the-spot performances against each other for 10 bucks and the chance at advancing to the final “Grand Slam.”

Afterward, praise washes over the lobby like wine spilling out of a too-small paper cup.

Meanwhile, over in Sonoma, the butcher paper hangs thick and impenetrable over the windows of the former Tin Can Coffee Company. After more than two years of dispensing coffee and comfort to two groups of open-mike readers, the owner closed the doors and sold the space less than a couple of months ago to the local chain of Johnny’s Java.

Welcome to the world of open-mike readings: feast or famine, with no rhyme or reason. A couple of long- termers keep going, but a recent one-two punch of closure and relocation has shaken the followers of this noble institution, and suggests that it’s not as secure as could be.

Certainly if love of literature were enough, Gail D’Arcy would still be in business. She opened the Tin Can Coffee Company in 1996, and started the open-mike poetry reading first thing. She kept the coffee flowing, and even passed the hat. But the cost per square foot was too high. “You’ve got to have a situation where you can afford to do it … . In order to stay in business you have to break even,” she says. “The open mikes don’t do much to increase revenue.”

Revenue is invariably the reckoning point for new or low-traffic locations; noise is another, and almost as difficult to deal with. Writers are generally sensitive people, who want the attention of the audience on them, not the whooshing of the espresso machine. Owners just want to keep the business moving. The reading at Lucy’s Cafe in Sebastopol, which ran for three short months, came to an end over that very issue. As William Judd, the reading organizer, has it, the very first event was heavily punctuated by the workers doing dishes. He then suggested trying an after-hours session, but people not involved in the reading were still coming in. In the third session, Judd put his foot down and asked the servers to keep quiet, and the next week the owner called off the Sunday afternoon experiment, offering different times, all during working hours, or perhaps a rental fee, which Judd declined. (At press time Judd still had not found a replacement venue.)

Other cafes fare a little better. The Copperfield’s Cafe in Petaluma has had an open-mike reading hosted by Geri Di Giorno for about a year. Her involvement with the Petaluma Poetry Walk and other literary events pegs her as a prime candidate for facilitator fade–“I am looking for someone to take over the Copperfield’s reading,” she admits–but that the reading still happens is a testimony to her commitment in the face of indifference. “[Here] we are at the mercy of regular patrons and the machines,” she says ruefully. “We’re coming in to read poetry, and the owners are doing something to generate business.”

On the other hand, there is Sally Spittles, owner of the Willow Wood Market Cafe. Spittles has been hosting, and often participating in, monthly open-mike readings in the back of her Graton market for over two years. Based on the few coffee cups and many water glasses that stood on her tables at the end of the most recent gathering, she probably takes in just enough money from her readers to pay for the coffee grounds. But it’s not a problem.

“The building is already there, the business is already there–all we have to do is open the doors,” she says. “We don’t make any money off of it, but I don’t have any employees working then, either. So it’s negative income, but it’s not a financial burden.”

EVEN GIVEN IDEAL open-mike conditions–strong coffee, a good sound system, rent paid through the end of the year–veterans of the literary scene know that open mikes have always come and gone. The Russian River Writers’ Guild has been hosting open mikes for years at locations all over Santa Rosa and the west county: Garbo’s in Guerneville, Copperfield’s in Sebastopol, Johnny Otis’ now defunct nightclub, Mudd’s Cafe, Higher Grounds.

Clearly, keeping the readings going in one place is a challenge.

“It doesn’t bring much money in,” says 20-year guild member and poet David Bromige, veteran of many a reading. “Or perhaps it disrupts things too much for the other patrons… . I think poetry is a profound disturbance, so it draws profoundly disturbed persons sometimes. Maybe the other patrons just get up and go to another cafe.”

Psychiatric assessments aside, Bromige has a point. Open-mike poetry is not toe-tapping jazz. People do not pack the house for unknown writers. To sustain a reading, the owner or proxy has to be committed to the concept, and have a certain amount of largesse to offer as a business entity. Because when the crunch of running a business hits, readings are often the first things to go.

But open mikes never seem to fade away entirely. Bromige has been approached about organizing something at Incredible Records in Sebastopol, just next door to Lucy’s Cafe. Over in Sonoma, even while the displaced readers from Tin Can mourn the loss of their space, writing-support groups at the Writers’ Center offer free-write, followed by open reading, for a very reasonable session fee.

And those with their ears to the track can always find open mikes at community events and festivals.

No matter where or how long.