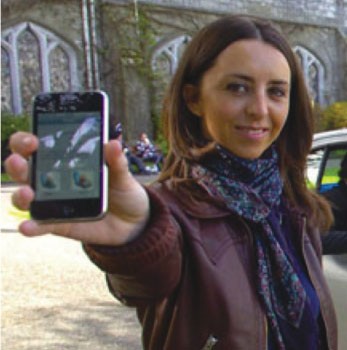 Heidi Fiedler turns her car into a bus sometimes. It doesn’t have a set schedule, because neither does she. But it also doesn’t have to—using the WeGo Sonoma app, Feidler can rideshare in a new, spontaneous way.

“I’ve carpooled with people in the past, but my schedule is pretty random and it didn’t work well,” says Fiedler. “What I thought was really neat about this program is that you can potentially find riders or drivers at any time you need to go. They use the term ‘critical mass,’ and once they achieve that, and there’s plenty of folks on the ride board, you can set your starting point and destination and it will flag you.”

WeGo, available in Sonoma, Marin and Contra Costa counties, is being funded by the Metropolitan Transportation Commission. The Sonoma County version is made possible by the Transportation Authority (SCTA), which named the Climate Protection Campaign in Santa Rosa as program managers. It’s their job to keep the critical mass building. But participants like Fiedler help that happen.

“I live in Rohnert Park and work in Santa Rosa,” Fiedler tells the Bohemian. “And since most of the Santa Rosa Junior College is participating, I’ll be able to pick up students and reduce my carbon footprint. That’s what I’m interested in doing—lessening my impact on the environment.”

As part of the program launch, drivers earn incentive points each time they carry passengers. And riders contribute to the gas costs. The minimal cost-share for this service is transacted using an electronic wallet—something like a refillable BART card—so no cash passes hands.

“The part I like also is that when you decide whether to accept a rider, you have a picture and a rating from other drivers,” Fiedler explained. “So you can kind of pick and choose people who have five stars if you’re intimidated, but I haven’t yet run into anyone I wouldn’t have had lunch with.”

Using an application developed by Avego, based in Ireland, WeGo Sonoma was included among rideshare pilot programs reviewed by the New York Times in July. Critical mass, it seems, is building across the nation, and more strangers are sharing rides.

“I signed up because I work at Agilent, and it’s one of the participating employers. I got a car kit and learned about the incentives. I could even earn an iPad,” says Feidler, laughing. “I’d love to have an iPad!”

It’s not out of reach, either—she’ll need to drive her “bus” 50 times to earn it.