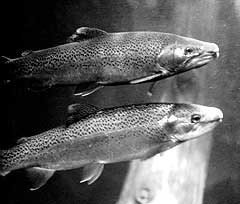 Of Trout and Drought

The rain blew through the North Bay over the weekend, just days after the California Fish and Game Commission (CFGG) issued emergency rules to shut down the salmon and steelhead trout fishery in parts of the Russian and American rivers. The recent rain won’t undo the drought-prompted closure, but may factor into the commission’s decision on whether it will continue past April 30.

On Monday, CFGC deputy executive director Adrianna Shea told the Bohemian the regulations would be in effect “in a few days,” pending an administrative law review.

The drought lowered water levels in the rivers to the point where “there are many places where spawning salmon and steelhead can’t migrate to their spawning grounds,” says Jordan Traverso, spokesperson for the California Department of Fish and Wildlife (CDFW), which is charged with enforcing the commission’s rulings.

“Recent rain, while good, isn’t enough,” she adds, citing research that “we would need it to rain heavily every other day through the end of May to reach average precipitation.” Still, the recent deluge may (emphasis on may) mitigate against extending the emergency closure beyond April.

“As of last week, before the rain, there was concern about having to extend the closure,” Shea says. “We anticipate revisiting the regulations.” Traverso says CDFW director Charlton Bonham will give a recommendation to the commission when it next meets on April 16.

In the meantime, Fish and Wildlife will “continue evaluating the streams, flows and migration of the fish,” Traverso says, “but in order to reverse the decision the commission made, we would have to go through a process that wouldn’t likely open the streams much earlier than the April 30 end date already put into place.”—Tom Gogola