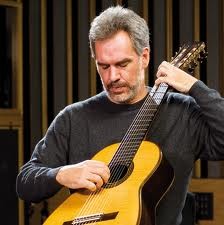 Oct. 13: Paul Galbraith at the Occidental Center for the Arts

An internationally renowned innovator, Paul Galbraith alters the physical form of the classical guitar and the way that it is played. Eschewing the traditional guitar for his eight-string Brahms Guitar, he plays a guitar supported by a metal endpin, similar to that of a cello, which rests on a wooden resonance box. On record, Galbraith’s back catalog includes critically acclaimed recordings of works by Bach, Haydn and Brahms, along with his own arrangements of folk tunes from various countries. In a concert presented by the Redwood Arts Council, Galbraith performs arrangements of Haydn, Ponce, Albéniz and Granados on Sunday, Oct. 13, at the Occidental Center for the Arts. 3850 Doris Murphy Court, Occidental. 4pm. $30. 707.874.9392.