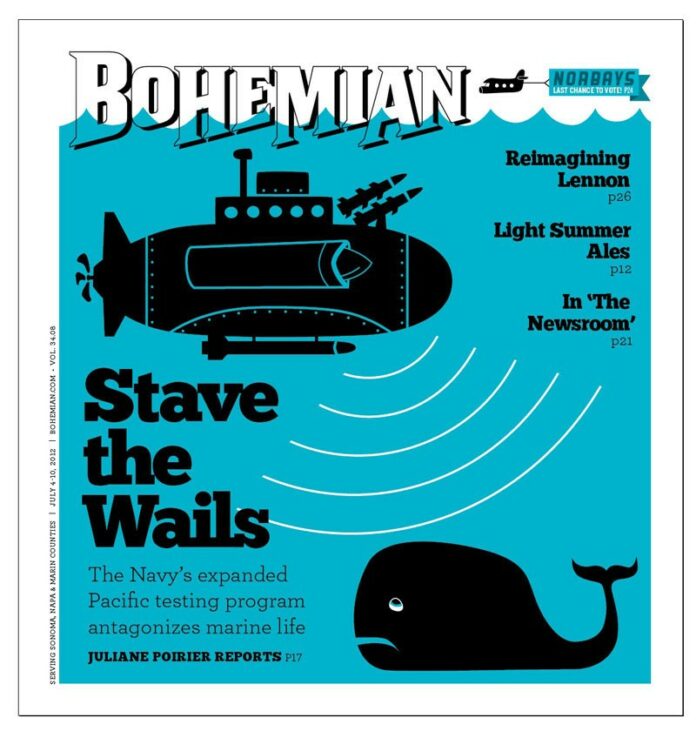 Whale songs traveled from the ocean to the pop charts in 1970, when folk singer Judy Collins recorded an old whaling song, “Farewell to Tarwathie,” accompanied by haunting humpback vocalizations. The song, over 150 years old, mourns that no bird “can sing to the whale.” Alas, ’tis still true. Although technology has invaded the seas with countless sounds, it is far from a serenade down there. Humans’ ocean noise, like an audio harpoon, can cause panic and dysfunction in marine mammals, occasionally to the point of death.

Concerned citizens want that sound turned down, and in an ongoing fight to keep sea mammals alive, they’re even willing to take on the Navy.

The U.S. Navy is increasing its Pacific training activities in waters from Mendocino to well beyond Puget Sound. To operate in this area, known as the Northwest Training Range Complex, the Navy is required to obtain training permits every five years, and the most recently issued permit has triggered public outrage over what some consider insufficient protection of marine mammals.

In January, a lawsuit was filed by Earthjustice, representing a coalition of native tribes and environmental groups, against the National Marine Fisheries Service under the Marine Mammal Protection Act. The lawsuit calls for the NMFS to “mitigate anticipated harm to marine mammals and biologically critical areas within the training range that stretches from Northern California to the Canadian border.”

Trainings allow the Navy to test weapons, use sonar, sink vessels, track aircraft and release toxins. Though it is possible for whales and other mammals to escape a physical threat, they have a harder time escaping noise, including sonar. Active sonar can affect marine mammals, and the Navy is required to mitigate these impacts. The question is whether the Navy is doing its utmost to protect wildlife while still carrying out its core mission.

“If they had to do effective protections,” Peterson adds, “they would not be able to do the type of testing they want to do.” Peterson claims the Navy is expanding its testing territory, taking more marine life and dumping more toxins in the ocean.

Mark Natsunaga, representing the U.S. Navy Hawaii-Pacific Fleet, denies these claims. “Geographically, we are not adding area but increasing activities,” Natsunaga tells the Bohemian. “Submarine warfare is different now than what people saw in Red October, because submarine technology has changed. Diesel electric submarines can be very quiet if running submerged on battery power, and are quieter than a fan on your home computer.”

Submarine warfare was once carried out at short range, when submarines were noisier and had to get closer to the ship to sink it. Now the lethal range is longer and the subs are much harder to detect, so detection skills of naval personnel must advance—using midfrequency active sonar.

Public concerns about sonar harming marine mammals dates back over a decade, when the Scripps Institution of Oceanography, part of UC San Diego, used sonar in long-term research to measure core ocean temperatures (the speed of underwater sound travel alters with temperature). A Scripps report from 1995 states that the low frequency sound emitted by some marine mammals—which enables them to navigate, communicate and feed—could be upset by human-issued sonar. The effects on these marine mammals, according to the report, “may range from no impact to subtle changes in behavior, temporal behavior disturbance of avoidance or important feeding or calving areas, deafness, and possible death.”

The Navy’s Northwest permit claims no animal deaths are expected from sonar, but marine scientist Fred Felleman disagrees. Felleman, Northwest consultant to plaintiff organization Friends of the Earth, says midrange sonar can deafen a whale. “A deaf whale is a dead whale,” says Felleman. “And noise is not even included in the [NOAA and NMFS] definition of critical habitat for marine mammals.”

A 2003 video by the Center for Whale Research in Washington’s San Juan Islands shows a pod of whales during a sonar blast from a Navy vessel. A siren sound is heard as 20 killer whales appear as if in panic, speeding erratically back and forth toward the water’s edge, away from the sound.

That sound can have a negative impact on mammals is universally known, says Felleman, but how to mitigate it is not. “Sound can cause anything from a mild disturbance to distress,” explains Felleman. “And midfrequency sonar can cause tissue damage.” Sounds can also create such a severe panic in marine mammals, according to Felleman, that they could surface too fast and get the bends.

“Marine mammals have been around 30 million years or so and are uniquely evolved to live in the ocean,” says Felleman. “The Navy was not required to get permits until recently when they were sued by the [Natural Resources Defense Council]. They intentionally expose animals to sound rather than using hydrophones to listen and track animals noninvasively.”

Brandon Southall, a researcher for the Institute of Marine Sciences at UC Santa Cruz and former director of the NOAA Fisheries acoustics program, leads an ongoing research project on the impacts of man-made sound, including sonar, on marine mammals, funded in part by the U.S. Navy.

“The Navy pays for a significant amount of marine mammal research in the world,” says Southall. “Not all results have been beneficial to the Navy, but they still get published because of the scientific process.”

According to Southall, sonar is only a part of the invasive noise throughout the ocean, including the NOAA-designated marine mammal sanctuaries. “Only a small percentage of those areas are ‘no take’ areas; that is, where no fish can be taken and no ships pass through,” explains Southall.

When the Navy operates in confined spaces that resemble underwater canyons, they now take extra precautions, according to Southall. “Evidence suggests that these kinds of conditions are risk factors,” says Southall. “When sonar is used in these areas, marine mammals respond in a strong way, because sound bounces back and forth and the animals can’t locate where it’s coming from.” Southall insists that “there is a lot more sound coming from everyday, ordinary ships than from active sonar.”

The loudest Navy sonar, reported in nonclassified documents, is 235 decibels. But while the Navy is held to public scrutiny in the permit process, commerce is not. Any business can operate ships emitting 190 decibels with no sound regulation, and ships run constantly back and forth across the oceans. Additionally, noise made by air guns used in oil exploration can be heard across the entire Atlantic.

The InterTribal Sinkyone Wilderness Council, a body of 10 coastal tribes, opposes the Navy’s latest permit and is a plaintiff in the lawsuit. Council representative Hawk Rosales explains that Navy activities interfere with “ways of life . . . along their ancestral coastline and marine waters,” including their relations to other species, such as whales.

“We filed the case because the NMFS wasn’t doing its job to protect marine mammals from Navy training exercises,” says Earthjustice attorney Steve Mashuda. “What we are dealing with here is a training range the size of California where there is no part off-limits to the Navy. We recognize that the Navy needs to train someplace,” says Mashuda, “but they need to train in places that have the least potential to harm marine mammals. We have asked for the permits to be sent back to the agency with more protections as soon as possible. Right now the only mitigation they have is to post people with binoculars.”

Mashuda claims the binocular sighting technique misses certain species, including whales that don’t spout and sperm whales, which can dive for up to 35 minutes. “If they’re underwater half an hour and you’re looking for 15 minutes, you’re going to miss them,” says Mashuda.

In the Crow’s Nest

Peterson’s website displays a biting cartoon of a ship with a captain calling up to the crow’s nest, “Ahoy! Any marine mammals in sight?” The lookout, unable to see all the whales, dolphins, sea turtles and porpoise swimming underwater, calls back, “No sightings today, sir!” Copy below the captions claims the Navy uses a “17th-century lookout method to locate marine mammals and other sea life before detonating bombs and using sonar.”

But the Navy says these critiques are inaccurate and insulting to their highly trained personnel. “Mitigations are more than just binoculars on the deck,” says Natsunaga. “People who characterize it that way are giving short shrift to Navy lookouts, who are trained using protocols developed by the NMFS. People need to credit the Navy for caring about whales, too. We’re proud of our environmental stewardship. The ocean is where we work and live. We’re not wantonly going out there and sonifying the ocean.”

Natsunaga explains that the Navy uses passive sonar listening in addition to binocular sightings to check for the presence of marine mammals before engaging in an operation. Passive sonar does not send out sound, but merely receives it. When marine mammals are sighted or heard, the submarine powers down and sonar is shut off.

“Visual observations from ships are one of the few things you can use,” says Chip Johnson, a marine scientist for the Navy stationed in San Diego. “Passive acoustic systems are also used but can’t always give you a range—they don’t work unless the marine mammal is vocalizing. We have highly trained lookouts, very good at detecting things in the water, including periscopes, fishing nets, trees, fishing boats and leisure crafts.”

‘No Cause to Worry’

The $20 million a year the Navy spends on marine mammal research funds both military and nonmilitary scientists, including researchers at Scripps, Woods Hole in Massachusetts, and Cascadia. Some of this science helps the Navy estimate how many marine mammals might be affected by its operations. For the Hawaii-Southern California area, the number of possible exposures during a year is estimated at 2.8 million; this is not the number of animals, but the number of exposures to sound. Some individual animals may be exposed more than once to sound that the NMFS dubs “level B harassment.”

But the numbers have people upset. Organizers in Mendocino and Humboldt counties, protesters in Oregon and politicians including Sen. Dianne Feinstein and congressmen Mike Thompson and Henry Waxman have demanded better protections for marine mammals.

These demands delayed, but did not stop, the permits.

Residents of the North Coast “have no cause to worry,” explains Johnson. “Very little Navy activity occurs off the coasts of Humboldt and Mendocino. Most training is in Southern California, where ships group and deploy as teams.” The northern waters are mainly for transit to more concentrated activities at Puget Sound, where typically a small number of sonar-equipped ships are ported. In Mendocino and Humboldt waters, according to Johnson, passing Navy ships travel “quite a ways offshore to avoid shipping lanes, usually beyond the line of sight.” As these ships are in transit, there is occasional sonar training. How that sonar will impact North Coast marine mammals appears uncertain, given the relative lack of data.

“There’s only so much we know about marine mammals,” says Johnson. “But research by the Navy and outside organizations is continuing. It’s challenging to do the studies on wild animals, because they move.”

As part of ongoing research, the Navy recorded over 10,000 hours of passive acoustic data—human noise and animal vocalizations—over the past year, from two bottom-mounted buoys off the coast of Washington. These data will be analyzed at Scripps. Non-Navy researchers who want a network of hydrophones for less invasive study claim the Navy blocks collaborative efforts in the name of national security—and that trumps environmental protections.

But animal advocates push on. “There’s too much noise in the oceans now,” says Marcie Keever, of Friends of the Earth. “And these animals can’t cover their ears.”