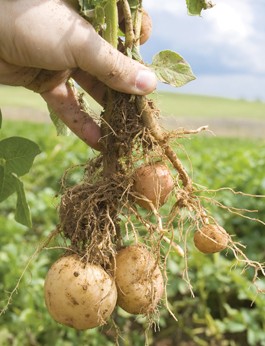 Bake them, roast them, fry them, mash them. Boil them in their jackets or without. The ubiquitous potato, which originated in Peru and went on to conquer kitchens around the world, is making a big comeback in Sonoma and Marin counties with local potato farmers growing more than two dozen varieties, many of them gourmet if not downright exotic. Who said the spud had to be common or ordinary? Certainly not the farmers, whose bumper crops add up to no small potatoes, indeed, and who have found riches in Yukon golds and uncommon heirlooms.

David Little has the biggest name in the local potato biz. He harvests about a hundred tons of yellow, red and purple potatoes, along with fingerlings and russets, in both Sonoma and Marin on five different properties that he rents from longtime farming families. “I cover all the bases,” he says. “I have purple vikings, German butter balls and Russian bananas.” One of his parcels straddles Sonoma and Marin, and he’s proud to say that with his feet spread apart he can be in two counties at the same time.

Potatoes, he explains on a recent gray day, were one of the main crops in the North Bay in the 19th century; several generations of immigrants from Ireland, Germany, Poland and Russia feasted on them as a staple of the American diet. Of course, the potato has never gone hungry, or out of style, though dieters have been frightened by its carbs.

Little’s famed fingerlings have made their way to many of the best Bay Area restaurants, like the French Laundry, Chez Panisse, Greens and Quince, as well as to farmers markets in San Rafael and San Francisco. With short, white hair and a trim white mustache, Little is a fit 63-year-old ex-roofer who once spent his days on ladders and perched high above houses. These days, he works in the fields seven days a week, and he’s happy to have both feet planted firmly on the ground.

Little loves growing potatoes a whole lot. “It’s not really work,” he says. “Potatoes are my calling. They’re who I am.” He’s delighted, of course, with the potatoes that he grows, but he doesn’t take the lion’s share of the credit for himself. It’s all in the terroir, he insists; the combination of the salt air from the Pacific Ocean, along with the fog and year-round moisture in the soil, means he doesn’t have to irrigate.

“You can’t not grow potatoes well here,” he says. “A couple of years ago, some of my seed potatoes spilled off my wagon and fell into a ditch. I came back two months later and there was a thick bed of potatoes.” The terroir is terrific, but Little knows how to read it, and how to make it work for him.

Nathan Boone, who is tall and lanky, grows organic potatoes on a 10-acre rented parcel near Valley Ford, and at his own farm, First Light, in Sebastopol. This season—his first serious commercial potato growing year —he planted two tons of seeds in the spring and in October harvested about 25 tons of such potatoes as the purple Peruvian, Ozette, Princess La Ratte and more.

Boone stores his potatoes in burlap sacks in a barn built in 1850 and sells them on Saturdays at the Santa Rosa Farmers Market. They’re also available at the Red Barn Store at Oak Hill Farm in Glen Ellen and at Berkeley Bowl in Berkeley. Depending on the variety, they sell for $2 to $3 a pound. One of his favorite recipes for fingerlings, which he gives out freely, suggests slicing them in half and roasting them in olive oil. They’re delicious.

A native of Indiana, Boone grew up on his family’s farm, moved west, grew vegetables in New Mexico, and for five years worked for the Sonoma Land Trust. On a cool, overcast afternoon, he showed off his sleek, new potato digger, a nifty machine that takes away the back-breaking labor of unearthing potatoes from the ground. “I came out here and fell in love with the landscape and with the lore of the place,” Boone says. “Potatoes were grown here a hundred years ago and through much of the 20th century. From 1926 to 1976, the Kirkland family grew them. There’s a lot of history on this land.”

Boone and White are both on the lookout for the famed “Bodega red,” a potato that, according to historians, the Russians brought to California in the 1800s and that was later cultivated by Indians at Fort Ross. “They’re mythological,” Boone says. “I’d love to get my hands on some Bodega reds.”

The Sonoma County North Slow Food Convivium has adopted the Bodega red as a pet project, and means to bring them back to farmers’ fields and markets, and make them a household name again.

Dee Swanhuyser, who lives in Sebastopol and works with local environmental groups, has been growing Bodega reds in her front yard garden since 1971; for decades, she has tossed them into her hearty beef stews. “I got them 38 years ago from Jim Sullivan, whose ancestors pioneered the county, and who swore they were from Russia,” she says. David White sees them as farming’s holy grail. “A true Bodega red would be a real find,” he says wistfully. “We have Tamales reds out here in West Marin, and they’re terrific. From my point of view, it’s hard to find a potato that’s not beautiful.”