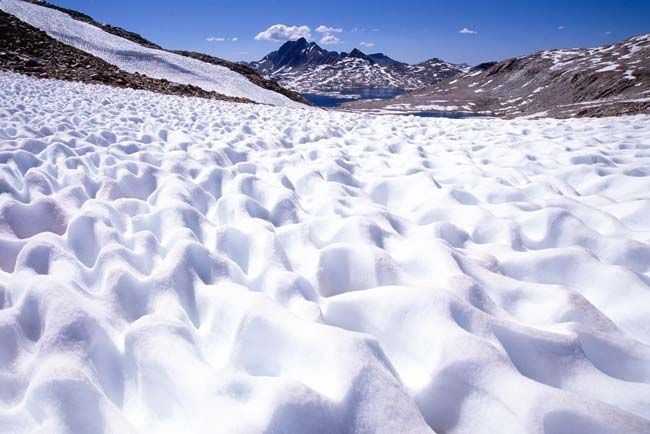 Former Bohemian classified ad rep Nick Curran is currently hiking the Pacific Crest Trail. Having left in April, he plans to finish his journey in September. Periodically, when he staggers into a town, he’ll send us an update. And man, are we jealous!

Muir Pass, courtesy of the PCT

Hiking the Pacific Crest Trail has been spectacular. You wouldn’t believe how beautiful some of the passes have been. I’ve been hiking the John Muir Trail portion of the PCT since Mt. Whitney. Going over some of the passes has been very difficult. Muir Pass in particular was completely snow covered—I had to hike in snow for 12 miles to get through that particular pass earlier in the week. Muir Pass is proved to be the most difficult portion of the trail so far.

The other night, I hiked until about 10:30pm, when I reached the Middle Fork of the Kings River (about 7 miles south of Palisades Lakes on the PCT – if you happen to check out a map of the PCT). When I arrived, I was greeted by two sets of yellow-green eyes. I was completely in the middle of nowhere, surrounded on all four sides by 3,000- to 4,000-foot-high mountain cliffs.

The eyes were really wide apart, and when I shined my flashlight towards them, the shapes (profiles) of the animals were just out of flashlight range. I noticed that the animals weren’t moving, so I picked up a tree and threw it on the ground to show them who’s boss; they still didn’t move. I think that they were mountain lions trying to get past me and get a drink of water out of the river.

One of them starting walking around the back of where I was, but never came closer than about 25 feet. I was so tired from hiking that I finally just set up my tent and went to bed about 20 minutes later. It almost seemed as if they could sense fear, but I had a lot of adrenaline going for hiking for 15 hours straight that day, and was not about to back down, even though I was scared.Lake Palisides, from Doug McConnell’s OpenRoad.TV

Arrived in the town of Mammoth yesterday. Mammoth is becoming a big resort town the likes of Aspen—they’re even building a new airport here with non-stop to Chicago and L.A.

I will leave here this afternoon and get in to Yosemite on Friday. I haven’t had a chance to make any emails for quite a while. When I have been in town, I’ve been too busy running errands to get to the computer.

Everything looks good as far as my plan to finish the trail by mid-September. I hurt both of my legs a few days ago from hiking too much. I hiked 38 miles a few days ago from just south of Evolution Lake to Vermillion Valley Resort (VVR) on Lake Edison. (They say hiking 17-18 miles through the Sierras is equivalent to walking 25 miles on flat ground.) The folks at VVR put me up for free at the resort so that I could let the swelling go down in my legs. All of the resorts and hiker-friendly towns have been great to the thru-hikers, we often get super-discounted deals and free supplies!