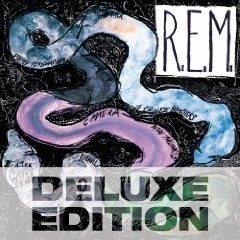 While not all albums are headphone classics, Reckoning still holds up as a brilliant & playful album from start to finish. From the rocking’ abandon of “Second Guessing” to the country rock of “(Don’t Go Back to) Rockville” to the sweet melancholy of “So. Central Rain”, R.E.M. perfected their jangle pop through nuanced, more sophisticated melodies and richer, more narrative imagery. Reckoning is the zenith of singer Michael Stipe’s and guitarist Peter Buck’s self-taught innovations in their respective crafts. “Harborcoat” alone shows the breadth of Buck’s potent inventiveness, and the gorgeous, unnamed album coda (available on CD for the first time) confirms that Stipe’s impressionistic vocals could at one time transcend the utility of lyrics.

Unlike the Murmur reissue’s live disc, which juxtaposed the densely textured record perfectly, the bonus CD merely presents an average gig from the era, while giving insight into the beginnings of fans’ cult-like devotion. “This song is for the guy that broke his leg coming in tonight, and went to the hospital and came back,” Stipe tells Chicago’s Aragon Ballroom before a rendition of “7 Chinese Brothers” where he abandons the lyrics halfway through. It’s easy to see why college kids loved them back them: endless pop hooks and enough post-punk spirit to open a large headlining show with a Velvet Underground cover (a countrified “Femme Fatale”) before getting their “big hit” over with (a delightfully sloppy “Radio Free Europe”).

The embryonic versions of later gems (a nearly ripe “Driver 8”) provide an accurate account of the R.E.M.’s early writing process, but they pale next to the thought of the era’s oft-mythologized studio experimentation (especially for such an already-heavily-bootlegged group). Where are all the rugged demos and bizarre outtakes? Will the fabled “thrash” version of “Rockville” ever see the light of day? Hopefully, Universal will actually mine the vaults for next chapter, the murky, contentious Fables of the Reconstruction, on which they start significantly tinkering with the formula. In the meantime, Reckoning Disc 1 is still essential listening, if only to quarry why Stephen Malkmus hates“Time After Time” so much.–David Sason