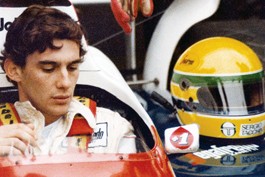 To a Brazilian, the idea of explaining who Ayrton Senna is would be as lunatic as asking a San Franciscan, “Who’s Willie Mays?”

In Brazil, Senna was bigger than the Christ of the Andes, “the one good thing about this country,” says more than one subject in Asif Kapadia’s hero-worshipping yet unquestionably touching biography of the Formula One racecar driver.

Sponsored by ESPN, Senna acquires several continents’ worth of TV footage documenting Senna’s short, glittering career. From a privileged Sao Paulo background, he was as handsome as a movie star, a cross between Jean-Paul Belmondo and Billy Crudup. He also tended to waste a lot of good Moet by using it as shampoo. Senna drove female interviewers to hard-to-watch levels of simpering (he even suavely puts the moves on national treasure and kitsch idol Xuxa in front of her kids, her puppets, God and everyone). One can hark to the complaints of fellow driver Alain Prost, with whom Senna had a long-running rivalry. Did Senna have such religious devotion that he took insane risks, so certain was he of God’s favor?

This fortune looks all the more bright after his terrestrial luck runs out. A woman at Senna’s final public appearance kisses his helmet; it isn’t the first time viewers divine something strangely knightly in the man.

We learn tidbits about Senna’s techniques—he was what in horse racing parlance what would be called a “mudder,” someone who performed even better in the rain. We get good sketches of the political quarrels over the placement of position poles. Despite the footage from the drivers’ seat, there’s no way to suggest the power of these cars, the terrific g-forces they whip up on curves, and the miracle that so relatively few get hurt. Some Formula One for Imbeciles details could have made this the best film about its sport, but it’s nonetheless a worthy profile of a man who carried the hopes of his nation.

‘Senna’ is now playing at the Rafael Film Center in San Rafael.