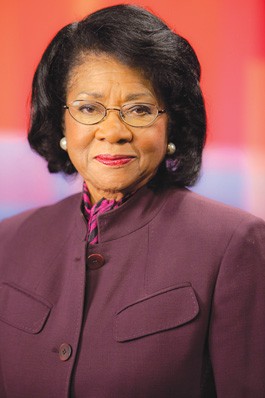 Never in Her Wildest Dreams

Belva Davis on life as a groundbreaking TV journalist

As the first black female TV journalist on the West Coast, Belva Davis has reported on important news stories from the birth of the Black Panther movement to the rise of the AIDS epidemic. Davis reads from her new memoir, Never in My Wildest Dreams: A Black Woman’s Life in Journalism, at Book Passage on Feb. 5.

“I did not attend college,” Davis says, on the phone from San Francisco, “so I was always scrambling. I didn’t know the mandated course study, all the things they teach you to make sure you are intellectually capable. I depended on survival skills.”

Davis’s hard scramble led to interviews and meetings with figures from Martin Luther King Jr. to the Queen of England. In 1977, she went to Cuba as part of a delegation led by future Oakland mayor Ron Dellums and was one of only two reporters allowed an interview with Fidel Castro. The other reporter? Barbara Walters.

“There’s always been a joke about how she came to the island with a million-dollar budget, hair and makeup, and then there was me with my one cameraman and producer,” Davis laughs.

Davis’ hardest story was covering the Harvey Milk and George Moscone assassinations. After receiving a call from her daughter, who was working at city hall that day, Davis rushed downtown as soon as possible. Hours later, she reported on the story to a television audience. “They say that you reach down to find a well of strength in terrible moments,” Davis says. “We saw our job as bringing calm and balance to the story. But all of us were totally shaken, and for me it as a really tough night.”

Despite her amazing career, the pioneering journalist remains stoic about her legacy. “I don’t think of myself as anything but someone who is continually trying to get out the viewpoints of people who have been overlooked,” she says. Belva Davis appears on Saturday, Feb. 5, at Book Passage. 51 Tamal Vista Blvd., Corte Madera. 2pm. 415.927.0960.