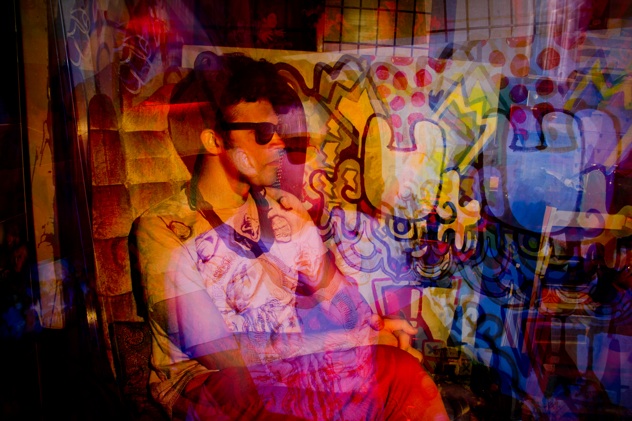 Merrill Garbus may be indie rock’s luminary of the moment, but some credit for last year’s acclaimed whokill album is due to the tUnE-yArDs’ other member and songwriter, Oakland’s own Nate Brenner. The bassist and multi-instrumentalist, also a part of experimental trio Beep!, is currently touring to promote Dirty Glow, his solo debut. The album, released October 9th under the moniker Naytronix, is a more subdued, mostly EDM song cycle that highlights Brenner’s gift for layered textures and oddly compelling grooves. In advance of his show Tuesday at Café Du Nord, we chatted with Brenner about the new album and juggling his various endeavors.

You wrote and recorded Dirty Glow over the course of a year, while on tour with the tUnE-yArDs and releasing a Beep! album. How does it feel to finally release the album?

It feels really good. I’ve been waiting a long time to release it, and now I can start thinking about what I want to do next. There’s something strange about that time in-between finishing a record and the release date. That’s a strange limbo. Now that it’s about to be released, I’m excited to start working on album number two.
You’ve said these songs reflect being on the road and are made for driving. Can you elaborate?

Nowadays, we’re used to just skipping from song to song on our iPods, but I wanted to make a full-length album that we would want to listen to from start to finish. If an album is good, you don’t feel the pain of the drive. I think the album is a combination of music that appeals to an A.D.D. type of listener, but also has some more extended sections, for those long stretches of highway. “Baby Don’t Walk Away” is the track that sums up that sound.
Most fans know you from the tUnE-yArDs. How different is the Naytronix songwriting process from tUnE-yArDs and from Beep!?

In tUnE-yArDs Merrill does most of the songwriting, and I help her out by exploring different harmonic ideas. We end up doing a lot of improvising and collaborating together. With Beep! we usually bring in little fractions of ideas and piece them together with each other, again using a lot of improvisation to flesh out the songs. In Naytronix, it’s me by myself in my studio, so instead of getting to bounce off ideas with other people, I make demos of songs and listen back and edit them on my own or get feedback from friends. Some of the Naytronix songs were originally intended for Beep, but they had a dance/pop vibe to them in their infant state, so they didn’t work out for Beep’s sound.

Are you still going to be part of tUnE-yArDs? Are you guys taking some much-deserved time off?

I am still part of tUnE-yArDs, and yep, we’re currently taking some time off. I’m not even sure when we’ll start working on the next album, but we definitely have a lot of ideas and are both workaholics, so I wouldn’t be surprised if it happens sooner rather than later.
What kind of band setup can we expect at the Cafe Du Nord show?

For the fall tour, I put together a trio. I love the trio setting because everyone has enough musical space to carve out their own place in the sound, without things getting too complicated or sparse. I have Sam Ospovat, who also plays in Beep!, on drums. Emery Barter, who I’ve worked with in a bunch of other projects, is on guitar, synth and bass. I play synth, sampler and bass, and the three of us sing. I think it’s an exciting live show since we do a bit of instrument-switching and we all can get some pretty diverse sounds. It’s always great playing in the Bay Area, though there is something nice about playing to an audience of complete strangers…I think playing for my friends sometimes psychs me out!
–David Sason
Naytronix plays Café Du Nord, along with Sonnymoon, Bells and B. Lewis, on Tuesday, September 25th. Tickets are only $8.00 each and available here.

Previous ArticleRide on a Zeppelin? Why, Sure! I’d Love to!