After the fires, mycoremediation offers a 'tragic opportunity' 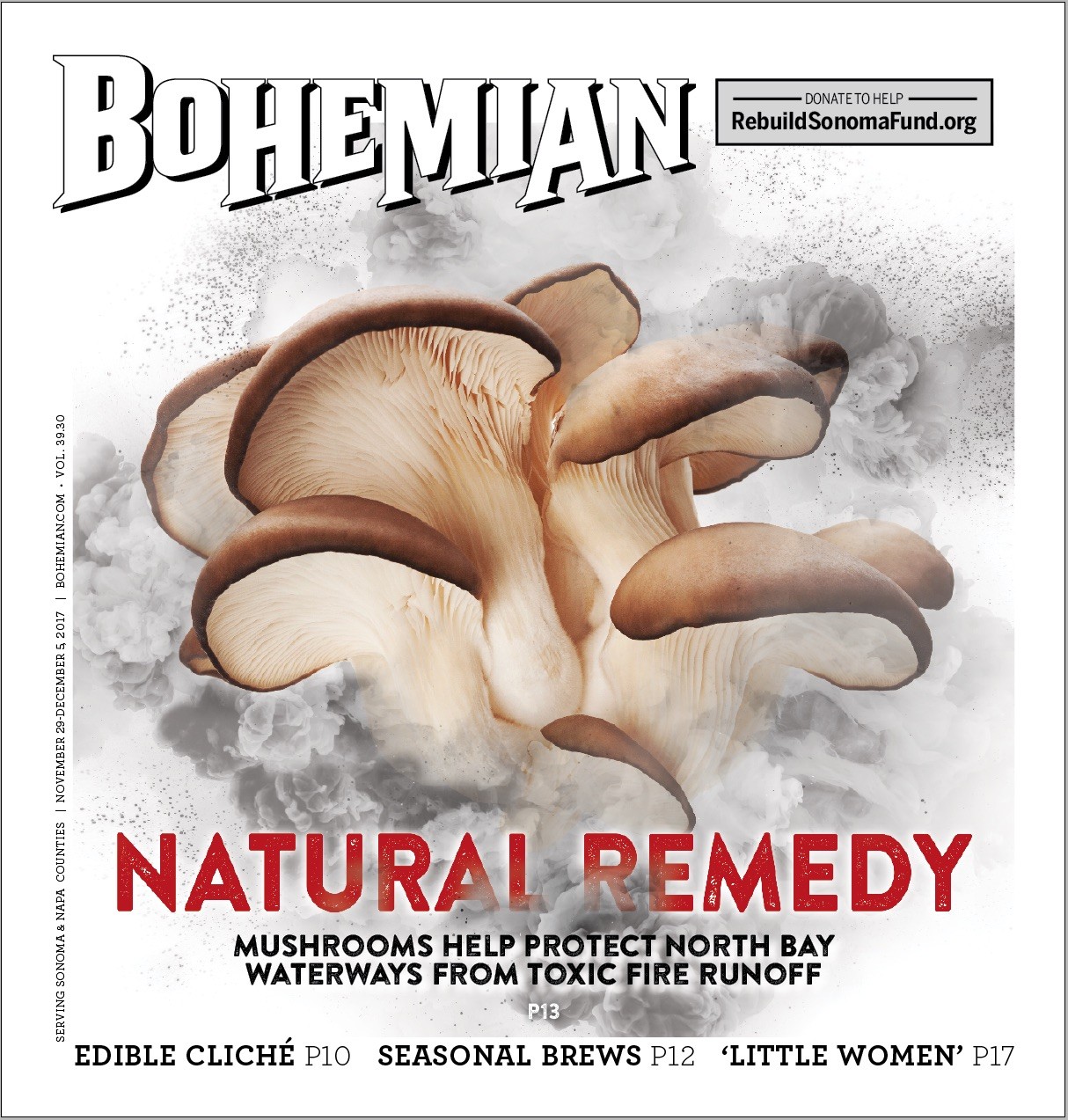 The disaster of October’s wildfires didn’t stop once the flames were finally extinguished. The toxic ash left by the firestorms—incinerated plastics, hydrocarbons, solvents, pesticides, heavy metals—lay like a ticking bomb on home sites, awaiting a rain storm to wash the deadly debris into drains and creeks. Once in waterways, the lethal plume could infiltrate watersheds and imperil drinking water and aquatic life.

But thanks to an unprecedented public-private partnership, protection from that environmental hazard in hard-hit areas like Coffey Park, Larkfield-Wikiup and Fountain Grove has come from an unlikely source: mushrooms.

Erik Ohlsen, a landscape architect and permaculture educator, saw that second wave of disaster coming and acted quickly to rally a diverse team of volunteers, environmental groups, landowners and public agencies to deploy cutting-edge bioremediation techniques using mushrooms and compost to absorb and neutralize the deadly runoff. He created the Fire Remediation Action Coalition on Facebook to help organize the effort and spread the word.

And word spread quickly. The project took off as another example of the volunteerism and generosity that have characterized local efforts after the fire. Sebastopol’s Gourmet Mushrooms donated thousands
of pounds of substrate used to grow mushrooms. Sonoma Compost and West Marin Compost donated compost. Petaluma’s Wattle Guy provided, you guessed it, wattles—barriers and fences made from natural materials like rice straw and sticks. And groups like Russian Riverkeepers and the Clean River Alliance marshaled volunteers to make, fill and install the wattles and monitor water flow during and after the recent rains.

It’s too early to know what impact the group has had in staving off another catastrophe. Data is still being collected and winter hasn’t even begun yet. But if the techniques prove effective, their efforts could be used as a case study for use elsewhere when urban firestorms occur—which fire experts say is a question of when, not if.

Ohlsen says the undertaking offers a “tragic opportunity” to divert and neutralize the toxics from this disaster and to prepare for future wildfires.

“These wildfires aren’t going anywhere,” he says. “They are ramping up in severity.”

In the days after the fires, Ohlsen, who owns Permaculture Artisans in Sebastopol, had been meeting with Daily Acts’ Trathen Heckman to brainstorm how to mitigate the effects of erosion and runoff from burn sites. Daily Acts is a Petaluma-based nonprofit volunteer organization that has served as a nexus for recovery efforts around the fire.

Ohlsen and Heckman settled on rice-straw wattles as the quickest, easiest technique for absorbing and diverting hazardous runoff. Ohlsen took the idea one step further: Why not inoculate the wattles with mycelium, in the hope that mushrooms that grew could absorb and in some cases transform the toxins through a process called chelation? The toxin-laden mushrooms would then be harvested and disposed
of offsite.

Mycelium is the weblike network of fungus that grows underground. The use of mushrooms to
clean up landscapes is called mycoremediation, a technique that’s gaining acceptance in cleaning up oil fields and toxic waste sites. Permaculture is a method of design based on the principles and systems of nature, and mycoremediation exemplifies the practice.

“It’s the perfect answer for this moment,” says Ohlsen.

Mycoremediation was pioneered by Washington state mushroom expert Paul Stamets, but the practice has never been used to remediate fire sites on this scale. The fires offer a tremendous opportunity to put the practice into action.

The Santa Rosa office of the North Coast Regional Water Quality Control Board has been deeply involved in storm-water diversion projects, and partnered with local groups on bioremediation because the need is so great.

“What was an erosion hazard before is an erosion hazard now times 10 or 100,” says Clayton Creager, environmental program manager for the water board. Mona Dougherty, a senior water-resource control engineer for the water board, helped supply the groups with wattles, and is actively monitoring their use and the effect of bioremediation. Use of compost and wattles to capture toxins and divert water is a well-established practice, but Dougherty says mycoremediation is not one the agency has used before.

Before last week’s rain, Chris Brokate and Will Bakx spent their days following storm drains and tracking the course of Coffey Creek in the fire-ravaged neighborhood to scout out the best places to lay wattles. Coffey Creek flows into Piner Creek, and Piner Creek empties into the Laguna de Santa Rosa, which in turn flows in the Russia River. They focused their efforts where storm drains entered Coffey Creek.

“The next disaster is right around the corner with all the toxics coming off,” says Brokate, founder and executive director of the Clean River Alliance, a Guerneville-based nonprofit dedicated to removing trash from the Russian River.

Bakt, a soil scientist who operates Sonoma Compost, created a custom blend for wattles made of straw, mushroom substrate, compost and manure. In addition to the use of oyster and turkey tail mushrooms, compost also helps chelate and biodegrade hydrocarbons in the soil, he said.

“We do believe it’s making
a difference,” Brokate says,
adding that data gathered from the sites will help confirm that. While Coffey and Piner creeks already suffered from pollution and trash, he said they are not dead yet.

“We can still save them.”

Chris Grabilll serves on Santa Rosa’s Board of Public Utilities and is acting as a liaison with the Water Quality Control Board and local nonprofits on the bioremediation projects. He is also part of the city’s Joint Watershed Task Force. While Brokate and Baxt installed their wattles where storm drains entered Coffey Creek, Grabill’s team helped install wattles in Coffey Park and the Larkfield-Wikiup area near burned-out housing sites with an eye on data collection and removal of toxic ash. The wattles in Larkfield-Wikiup were inoculated with mycelium; the Coffey Park sites were not, and will act as the control group. Peer-reviewable data will reveal the impact that local efforts have on the protection of water resources.

“The best-case scenario is we mitigate a second disaster,” says Grabill.

Toxins are hard to remediate once they enter the watershed, he says. “It goes from a two-year issue to a 25-year issue if we don’t take all steps in the first rains.”

For Ohlsen, the spirit of volunteerism and grassroots partnership with public agencies is one of the bright spots of an otherwise grim situation. He’s also working with large landowners on mycoremediation, and hopes to gain rich data about best practices that could be duplicated elsewhere.

“This is just the start of the whole process,” Ohlsen says.