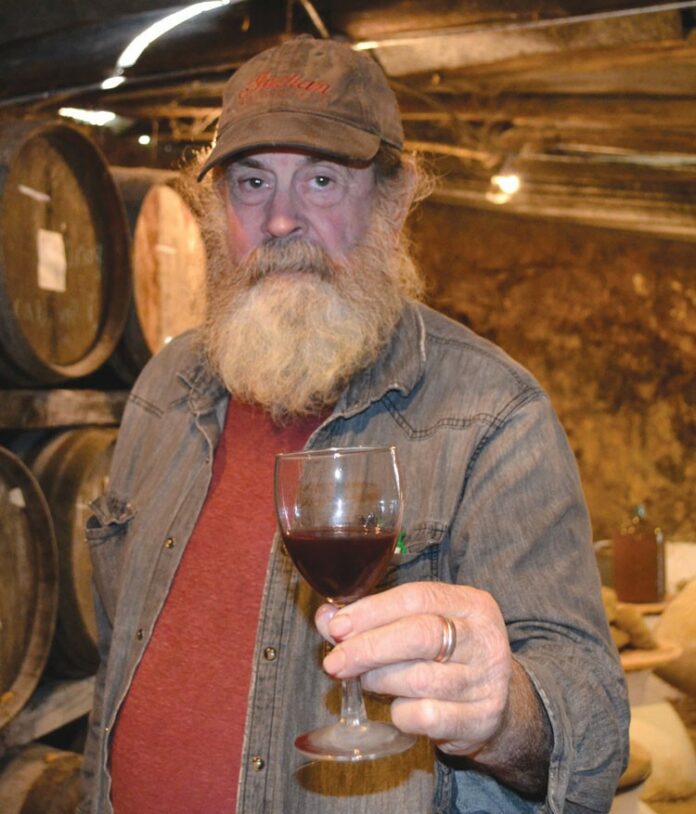 Coturri rolls back the millennia to stay up to date

Nestled in the foothills of Sonoma Mountain since 1979, Coturri Winery might, by contemporary California standards, be said to be a winery of a certain age. The scene on the cellar floor, however, is positively antediluvian.

“It’s astounding to me,” winemaker Tony Coturri says approvingly of his new collection of amphorae, buried in the dirt floor of his cellar in between stacks of tarnished oak barrels that are looking fairly ancient too. “For 8,000 years they’ve been using these things.”

These clay vessels are actually quite younger than that—brand-new, shipped from the nation of Georgia, where wine made in the beeswax-lined fermentation vessels is enjoying a renaissance among new fans of old traditions.

Coturri says he’s been getting interesting results from the odd-looking ovoids—a cloudy fermentation cleared up after the full moon, for instance. But how to clean these things, when they’re buried deep in the earth? Luckily, he’s got a lanky assistant in the person of Caleb Leisure, a globetrotting young winemaker who, after stints in France, has been helping Coturri to reboot the winery in the last two years to meet increasing demand for the “natural” wine category.

Coturri grants that that he’s been called the godfather of natural wine, a loosely defined term that generally means wine made without added yeast or sulfites. When you’ve got good grapes, says Coturri, there’s no need to add sulfites.

Yet after Leisure lifts a heavy glass cover off the clay seal of an amphora to extract a sample of a firm, flavorful 2017 white wine that was fermented on its skins, he tops it with inert gas with the greatest of care. Even in this rustic setting, hygiene, not sulfur, is the key, says Coturri, relating what a Southern California wine distributor told him: “Tony, your wines are a bridge between conventional and natural wines—because they’re so clean, you can’t tell they’re natural.”

Strangely enough, there isn’t much of a market for such wines in the North Bay, Coturri says, even if he was the poster boy—or poster graybeard—for organic winemaking pictured on the wall of the local Whole Foods‚ until he pointed out that they no longer carried his wines.

An everyday red blend from Mendocino and Sonoma County fruit, the non-vintage Sandocino North Coast Lot No. 2 ($25) smells like mixed berries in a bed of hay, and brings me right back to the first Coturri Zins I sampled from a folding table they’d set up in the Sonoma Plaza for some wine event or other, about 10 years ago. Or is there something about this aroma more ancient than that?

Find Coturri wines at Crocodile Restaurant in Petaluma, and at coturriwinery.com.