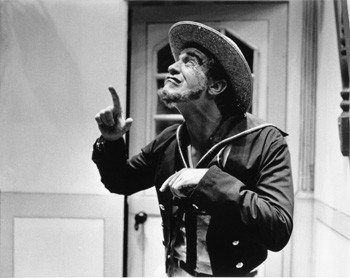 A Night at the Opera

When the chorus of sailors sing “We sail the ocean blue” at the upcoming Napa Valley Opera House production of Gilbert and Sullivan’s classic musical comedy HMS Pinafore, their reverie will signal the latest turn in a rocky 123-year voyage for this venerable theater, which opened in 1880 with that very same production.

After 89 years of darkness, the stage lights once again will shine at the lavish Victorian-era opera house, which closed its doors in 1914 and fell into disrepair over the years. Now, thanks to a $2.2 million challenge grant from Napa Valley wine baron Robert Mondavi and his wife Margrit and a concerted community fundraising effort, this newly renovated 500-seat theater reopens Aug. 1 with a gala sold-out celebration that will feature stage and film star Rita Moreno. The following night, the HMS Pinafore sets sail for a nine-performance run in a fully staged, professional production by Opera à la Carte, one of the top Gilbert and Sullivan companies in the country.

The opera house boasts quite a legacy. During its heyday, the building served as the cultural heart of the Napa Valley and played host to such luminaries as Jack London, John Philip Sousa, and the legendary soprano Luisa Tetrazzini. Vaudeville shows, masquerade balls, and temperance rallies were regular fare.

“Napa residents have been resolute in their determination to restore this wonderful and beautiful theater,” notes Michael Savage, executive director of the Napa Valley Opera House. “This is truly a gift to the whole community, a place where local artists and groups can find a venue, international artists can be showcased, and children can discover the magic of live performing arts.

“It has been a long struggle, but the dream that volunteers have worked towards for three decades is finally coming true.”

The grassroots campaign to save the opera house from the wrecking ball started in 1973 when a group of local artists, historians, and others intent on preserving the structure–including the late John Whitridge III, Veronica di Rosa, and Tom Thornley–succeeded in getting the dilapidated building listed on the National Register of Historic Places.

Over the years, the renovation campaign gained steam, but it was the 1997 announcement that the Mondavi family would match funds that really gave it a boost. To acknowledge the importance of that challenge grant, the main hall has been named the Margrit Biever Mondavi Theatre.

Despite extensive vandalism and water damage, much of the original woodwork and many other features were preserved while new dressing rooms and other accommodations have been added.

“We’ve really tried to draw from the best of two eras,” notes Savage. “Audience members and performers can admire the magnificent craftsmanship and ambiance of the theater’s historic features while taking advantage of the comfort, safety, and efficiency of a modern performance space.”

Other upcoming events include the Wine Country Showcase on Aug. 5 with scenes from Forever Plaid and performances by the Lawrence Pech Dance Company; an Aug. 13 concert by soprano Ruth Ann Swenson with the Napa Valley Opera House Festival Orchestra conducted by Richard Williams; and Italian comedian Ennio Marchetto, who will perform his spoofs on everything from the film Titanic to the Three Tenors during a two-week run from Aug. 15-31.

Boy, there are some high-powered parents in Sonoma County. Project Everybody (a local group of parents, teachers, and school administrators) is sponsoring a benefit concert featuring the Grammy-award winning Los Lobos and guitarist Robben Ford (formerly of the Miles Davis Band) on Sunday, Aug. 3, at Arnold Field in Sonoma (doors open at 11:45am). Advance tickets are $25. Call 707.935.7744.

His songs have been recorded by everyone from Bob Dylan to Paul Winter, but probably Texas singer and songwriter Jerry Jeff Walker remains best known for his 1968 composition “Mr. Bojangles.” And though the fickle music industry has kept this talented troubadour in the background over the years, he’s an engaging performer with a treasure trove of material. Walker makes a rare North Bay solo appearance Aug. 3 at the Mystic Theatre in Petaluma. Other upcoming shows at the Mystic include reggae greats Toots and the Maytals (Aug. 19) and pop singer Joan Osborne (Aug. 29).

You can get a dose of smooth jazz at this year’s Jazz on the River (formerly the Russian River Jazz Festival), but one of the best acts won’t be on the main stage. Pianist Benny Green (the Ray Brown Trio) and soulful guitarist Russell Malone have worked together since 1995 and collaborated on 2000’s terrific CD Naturally, and there’s a good chance that their appearance Sept. 6 and 7 on the Wine Garden Stage will be the highlight of the weekend.