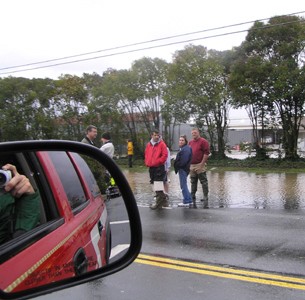 Rain and Reflections: Napa residents become the unlikely target of this art shot by a citizen photojournalist.

River Runs Through It

With its revitalization project almost a decade old, did the Napa River have to flood?

A stroll along the tranquil Napa River as it meanders through the city of Napa north toward the vineyards of St. Helena is normally an enjoyable, relaxing experience. The river’s depth ebbs and flows as tidal forces push water upstream at high tide, only to recede again later in the day in a cycle as old as the river itself. Newcomers to the region might give in to the urge to look upon the dark flowing waters as a harmless, sleeping waterway, capable of conjuring up visions of tranquility and beauty as it flows lazily northward. They would be correct–and unbelievably naïve.

It’s true that most years the Napa River flows about its business, a harmless, county-friendly waterway with vast potential for future development. Come October and the winter rains, however, all bets are off. County statistics tell a far different and more dangerous story about the river than its calm summer surface suggests.

In fact, according to Napa County’s own admission, FEMA lists Napa as ranking six out of 500 California communities that have suffered “repetitive” flood damage over the years. Depending on whose numbers you use, Napa has experienced between 22 and 27 serious flood incidents since 1862. Between 1961 and 1996, Napa County residents suffered $542 million in property damages, an amount that climbs every year, including this one.

As is now well-known, the river showed its destructive side once again this past New Year’s weekend, dumping nearly 10 inches of rain on the area in a 24-hour period, soaking the already saturated landscape and causing the river to rise and overflow its banks. The result was a logistical nightmare that longtime residents have come to expect and an eventuality that city officials have tried to plan for in advance. But even so, by the time the waters receded in the following days, the storm-induced flooding left behind $114 million in damage to area businesses and homes.

But that’s not the way it is supposed to be. The Napa County Flood Control Project’s “Living River” design, conceived in 1996, aims to protect some 3,000 area properties from flood damage, restore the area’s wetlands and improve the river’s health. Overseen by the U.S. Army Corps of Engineers, the project relies on the initial purchase of lands, which voters approved in a bond measure in 1998. Now some 10 years from the drawing board and with the flood-protection component of the “Living River” design only 40 percent completed, many Napa residents wonder why they’re still wringing out carpets and washing down mud.

Knowing when and where the river will reach flood stage is difficult to judge and relies on a number of factors, including the varying depth of the waterway, how each event is gauged (whether it’s categorized as a 100-year flood, 50-year flood, etc.) and the physical layout of the river’s course. Records show that during the recent event, the Napa River eventually rose to 23 feet, well above the predictions put forth, before it crested, affecting some 4,000 area families and causing 1,400 families to evacuate.

O’Haire says the reason that floodwaters have inundated the area repeatedly over the years can be attributed to those parts of the Flood Control Project not yet completed. City officials have known for some time that the oxbow portion of the river that lies near downtown, just off First Street and adjacent to COPIA, is physically unable to drain quickly enough to keep waters from backing up and spreading across the landscape. When the Flood Control Project is eventually completed, a bypass channel will be placed, thus diverting a major portion of the water that flows into the oxbow, eliminating the threat of flooding.

Heather Stanton, project manager for the Napa Valley Flood Control District, says that the main problem lies in securing federal funds to move ahead. “The U.S. Army Corps of Engineers submits a yearly budget for funding,” Stanton explains. “If you add up what was requested from 2000 to 2005, $99 million was requested, but they received only $66 million. Had the project been funded by the roughly $40 million not granted, the difference would have gone a long way in mitigating the damage caused by the recent flood. There is $110 [million] to $115 million of work yet to be done by the Corps. The longer it takes to get that money from the government, the price of the project will continue to go up.”

Stanton says that in the city of Napa alone, the cost estimate of damages from the flood was $70 million. She fears that delaying the completion of the project will only increase the overall cost of the project and leave the area susceptible to incurring even greater disaster costs if another flood occurs this year or in the near future.

“Both Congressman Thompson and our two U.S. senators have been good about applying pressure for funds, but we’ve never received the amount of money we were promised,” she says. “Unfortunately, you either pay now or pay later when the next flood hits.”

Easy to Gauge: Flood waters rose to some 18 feet in some areas.

Supervisor Diane Dillon, Third District Napa County, sits on the board of directors for the Napa Flood and Water Conservation District, the parent organization overseeing the Flood Control Project, and is intimately aware of the problems the county faces in securing funds at the federal level. She says the estimated $114 million in damage suffered by area residents and businesses could have been worse had the project not already been underway, which brings up the issue of the project’s current status.

“Had we gotten the federal funds we were promised when the Flood Control Project began, we would be nearing completion at this point,” Dillon says. “The state doesn’t have the money and the feds haven’t made the project a priority.”

Dillon agrees with Stanton that yearly requests for funding by the Corps of Engineers have consistently returned far fewer funds than asked for. As proof of the county’s commitment to the project, Dillion cites the 1998 Measure A that Napa County voters approved, which called for a one-half cent sales tax to fund flood protection and watershed-management projects across the county. The bulk of the funds, Dillon notes, were earmarked for the seven miles of flood control. She says that matching federal funds for the project have not materialized at the level promised, putting the project a full four years behind schedule.

“We’ve put up our money in advance to buy the land for the project at the current market value, rather than waiting for prices to go up in the future, and because the Corps won’t request money to continue unless we own the land,” she explains.

“The federal government isn’t coming through on their end. The public doesn’t understand the amount of money that’s going into the Iraq War. I believe in supporting our troops wherever we send them, but this war is very costly and cuts have to come somewhere. The average citizen sees whatever is in front of them and has meaning to them personally. They want schools funded and other necessities, and take action to make their voices heard. No one thinks about cutting funding to the war. It is projects like flood control that the government cuts to make up the difference.”

Putting her frustration aside, Dillon says the current task facing the county is to secure funds through FEMA by having Napa designated a disaster area. Under existing guidelines, she says, the federal government would pay 75 percent, the state 20 percent and local governments 5 percent toward the recovery process. When you take into account that this is only the beginning of the rainy season, a quick recovery takes on added importance. “If the rains hold off and allow the ground to absorb the moisture already there, we’ll be OK,” she says. “But with global warming on the rise, I think we’re going to continue seeing much of the same.”

Talk to anyone in the know about the flood damage and Russell Kassman’s name will come up as one of the hardest hit business owners in the city. He owns the Depot Restaurant, situated just a few hundred yards away from the Napa River in an area that saw some of the worst flooding over the holiday weekend. Kassman’s restaurant was one of the last to reopen after extensive repair and cleanup. In retrospect, he sees the city’s response to the flood and the recovery as good as could be expected.

“I blame PG&E more than anyone,” he says. “I had five feet of water in my restaurant, and the electricity went out. Even if I had had a sump pump to get the water out, it wouldn’t have done any good. The loss of electricity gravely affected many businesses. Why can’t a company that size understand that without utilities, even if you’re not flooded, there’s still going to be damage?”

Kassman’s other concern is the length of time FEMA is taking to declare the region a disaster area.

“It’s pretty amazing that three weeks after the flood, there’s still no word from FEMA,” he says. “Once they declare Napa a disaster area, we’ll be eligible for low-interest 4 percent loans. I’m doing OK because I had some money set aside, but there are some small businesses that aren’t going to be able to reopen. That’s FEMA’s responsibility. I’m not asking for a handout; I’m just asking for a helping hand.”

Part of the responsibility of securing FEMA funding falls to Gov. Arnold Schwarzenegger’s office as the state’s chief advocate in Washington, D.C. Asked what his reaction was to the governor’s visit to Napa shortly after the flood hit the area and the chances of his securing federal funds, Kassman snorts. “Great photo shoot. Maybe he should ask Maria to do something. She might have a better shot in D.C. than he has.”

Of course, Napa’s flood control project is only one part of a larger dynamic when the issue of catastrophe is discussed. Earthquakes, wildfires and the potential for terrorist attacks all have to be considered equally as possible scenarios to be faced in the future.

Neal O’Haire knows this won’t be his last disaster and warns that urban resident’s expectations are often too high. Reliance on the 911 emergency system may not be a possibility when you need it the most.

“Everyone has to remember that California is not a theme park,” he says. “When the next catastrophe hits, you have to be prepared as an individual and as a family to take care of yourself. Because the United States has one of the greatest disaster response systems in the world, we’ve developed mental expectations it will be there when we need it. We’ve become lulled into believing it will always be there. In today’s world, you can’t think that way. It’s a tough lesson to relearn.”