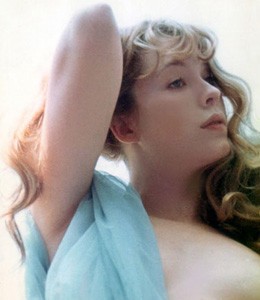 Teen Angel: Pamela Des Barres made the scene when she was just 16.

Pamela Des Barres has become the go-to gal for juicy, insider tidbits in various rock-related documentaries and VH1 specials. There we see her brunette-framed talking head, looking and sounding not unlike a friendly next-door neighbor who stopped by to have some tea, recounting sunnily sordid remembrances of the L.A. glory days in the late 1960s and early ’70s, when she was a sweet, golden-haired flower child. Perhaps the present-day franchising of her groupie persona is cleverly engineered, but perhaps it is not. She was, after all, there–there being Jimmy Page’s limo, Mick Jagger’s crotch and Keith Moon’s thrashed hotel rooms–and it’s all but impossible for any rock-loving human, let alone television producer, to resist the pull of an all-access perspective.

Des Barres cemented her groupie-goddess status with her free-spirited 1987 tell-all book I’m with the Band: Confessions of a Groupie. It covers her life as a young rock muse, from her preteen grieving for an enlisted Elvis to her marriage to walking-glam-rock-disaster Michael Des Barres. In between, hearts break, body liquids swap, chemical-fueled revelations abound and music thrives.

I’m with the Band was out of print for years until 2005, when an updated edition came out on Chicago Review Press. The book is still eminently readable, offering all the fun of a trashy read without resorting to sensationalism or mean-spiritedness. Des Barres’ writing is as gauzy and flowing as her threadbare satin and antique lace ensembles of the late ’60s; she adopts a sort of Beat/teenybopper style, striving for the Deep and Profound. But even when her gushy-gushy leanings get the best of her, Des Barres’ sentiments always ring with joie de vivre, unleashing positive vibes galore.

In his forward to the updated edition, wanker guitarist Dave Navarro calls Des Barres “one of the most unique and important rock historians of our time.” I initially found this proclamation laughable, a statement dripped from Navarro’s pen to score some kiss-ass points with his pal Miss Pamela. But after some consideration, I felt ashamed of my snobbism. Just because Des Barres’ writing does not reek of the academic postulation and dry reductionism of “serious” rock criticism–she’s not part of the boys’ club with Christgau, Marcus, et al.–does not discount her insights. If anything, it deems them more primal, more direct and more powerful. “Mick Jagger personified a penis,” she says of her earliest erotic dalliances with the Stones. If that’s not 100 percent rock ‘n’ roll, I don’t know what is.

Even at her most debauched, the Des Barres of I’m with the Band strives to become a good human being of some impact on the world. Her constant run-ins with world-famous musicians simultaneously distract her from this goal and help her to attain it. “Something came over me in the presence of rock idols, something vile and despicable, something wondrous and holy.” That something is awe, but she still manages to see the boys behind the gods. “I hope I brought some warm flesh and blood to the myth, before it’s too late,” she writes, fearing that giants of rock such as Hendrix, Zappa and Morrison will be “mythologized and made more (or less) than human.”

Glam Slam: Pamela and Michael Des Barres, photographed on the day they met.

The moral conflict in Karen Schoemer’s Great Pretenders: My Strange Love Affair with 50s Pop Music ($25; Free Press) is much less one of behavior than it is one of taste. An adult with rock-critic experience at Newsweek, Rolling Stone and the New York Times under her belt, Schoemer found herself impossibly drawn to the bleachy-clean world of 1950s pop crooners.

Schoemer struggles with this attraction, listening to thrift-store copies of Pat Boone and Georgia Gibbs albums in a desperate attempt to glean legitimate musical greatness. And she fails miserably–the music repulses her–but she perseveres, hungrily searching for a magic nugget of truth, a key to unlocking the mystery of the music that molded the expectations of her parents’ generation. It is only when she accepts her leanings (“It never clicked in my mind that I could be a critic who liked bad music”) that she is free to love the songs unabashedly, hearing them anew with ears untainted by universal notions of the soullessness of 1950s pop.

Schoemer tracked down dozens of former teen idols and interviewed them, all the while grappling with the validity of her mission. One by one, the real lives behind the soothingly vapid ballads surface, and Schoemer succumbs. She develops a crush of sorts on Pat Boone and receives a surprising jolt of pure musical energy at a Frankie Laine supper-club concert. “Are we really looking for artistry in pop music, or is three minutes of ridiculous distraction enough?” she ponders.

We’re trained to believe that there’s a huge cultural and musical gulf between Led Zeppelin and Patti Page, but encounters with each render Des Barres and Schoemer starstruck. The thrill of spending time with performers whose gifts of musical talent–and, to a greater extent, charisma–make them, to us mortals, somewhat superhuman, and packs a fierce sting and draw. It’s only natural to want to enter into this sacred place as completely as possible. Doe-eyed Des Barres realized she could with her body, while Schoemer found her entrée through journalism. But whatever the means, both authors joyfully celebrate what it is to be a fan.