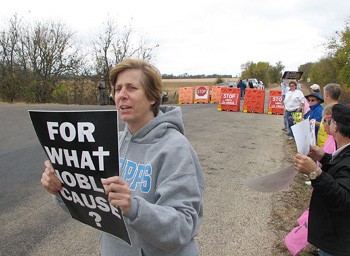 Photograph by Jeff Paterson of Not In Our Name

March 19 marks the third anniversary of the start of the war in Iraq. Many who thought the war would end quickly–including our president–may be surprised to find that it has been three years already, and that 2,300 American soldiers and over 30,000 Iraqis have died.

This week, a number of groups–including Veterans for Peace, the Sonoma County Peace and Justice Center, and Women in Black–have organized a protest commemorating those who have died in the war. The event, called Arlington West–Sonoma County, is the first week-long, 24-hour protest of the Iraq War in Northern California.

Although some events are being held in Cotati, Santa Rosa and downtown Sebastopol, Arlington West is itself a camp on Highway 12 between Santa Rosa and Sebastopol, near the Humane Society. In addition to the tents in the camp, a symbolic graveyard will represent the dead with tombstones, crosses, Stars of David and crescent-and-star symbols.

The schedule includes speakers, an interfaith dialogue between religious leaders, open mics, nonviolence workshops, music, films and a chance for teenagers to speak out. On March 19 in the Sebastopol Plaza, the event will culminate into an all-out protest against the war.

“When we were organizing the event, we ended up in a split,” says Susan Lamont of the Sonoma County Peace and Justice Center. “There were those who wanted an angrier protest against the war and those who wanted a more solemn event commemorating the dead.”

The idea for the protest started when Cindy Sheehan set up Camp Casey near George Bush’s ranch in Crawford, Texas, after the death of her son in the war. Local activists wanted to set up a version of Camp Casey in Sonoma County, but couldn’t find a location before Sheehan became old news. So they decided to hold the protest on the three-year anniversary instead.

The Arlington West movement started in Santa Barbara when peace activist Stephen Sherrill created a field of white crosses representing the Americans who died in the war. It got such a rigorous response that Veterans for Peace organized similar exhibits throughout California, including in Orange County, San Francisco, Santa Cruz and now here.

Throughout the protest, veterans are speaking about their experiences. From a mother who lost her son in the war, to a 22-year-old veteran who served in Iraq to a Vietnam vet who walks with a cane, people will be able to hear firsthand accounts of life in the military.

“One veteran who will be speaking on the 19th served in the second World War and spent several years in Vietnam,” says organizer Robert Manning, who himself served in the military during Korea. “He’s going to be 80 years old this May. He spends a lot of time talking to young women and men about what it is realistically like in the service.”

At the end of the week, the antiwar protest will give people a chance for an old-fashioned, sign-waving demonstration.

“I see the week as building up to that,” says Lane Dubroff, who is a member of Women in Black, a group that mourns all violence. “The week starts out commemorating the dead and ends in protest of the war.”

Many of the groups, such as Women in Black, are involved in the protests against the war that happen every Friday in Sebastopol and every Wednesday in Santa Rosa. In many cases, pro-war protesters also show up to demonstrate.

Organizers expect counter-protest from pro-war groups this week. In fact, they are prepared for the worst. The camp is manned 24 hours a day and local authorities have been notified. Organizers even hid the location of the protest prior to the event for fear of vandalism.

But Manning hopes Arlington West–Sonoma County will start a healthy dialogue about the war.

“We can’t tell people how to think with regards to the tragedy that is the war in Iraq,” he says. “All we can do is present the information and let people have the experience of understanding the war through that information. And then, if they want, they can take a stand with us at the end.”

The Iraq War has been compared to the Vietnam War in many ways. Whether or not the comparison is fair it’s clear after three years that the conflict is not the short military action the American public were told it would be.

“The world should start listening to the peace movement.”

Arlington West–Sonoma County culminates on Sunday, March 19, with a rally in the Sebastopol Plaza. Speakers include Norman Solomon, Peter Phillips and others. Noon to 4pm. Free. See www.peaceandjusticesonomaco.org for more information. A Stop the War march and rally in San Rafael is slated for Saturday, March 18, at 1pm on Fourth Street. 415.491.0113.