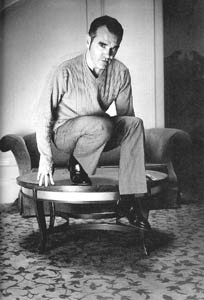 Morrissey turns the LBC into the Land of 1,000 Sideburns

Welcome to our poetry recital,” Morrissey said after opening his show at the Luther Burbank Center on Monday, Sept. 9. “We are not Hall and Oates,” he assured the crowd, alluding to the very ’80s rock duo’s upcoming LBC performance that was printed up in the program directly across from Morrissey’s bio.

It was a textbook Morrissey comment–witty, dry, self-deprecating, and just a wee bit snobby. But it also brought up an interesting point, because Hall, Oates, and Morrissey all share something in common, besides professionally going by their last names. Neither has an upcoming album to tout, and neither has released much new material to speak of in the past five years. Why is Morrissey on tour now? And how did the universally idolized former frontman for the Smiths, perhaps one of the ’80s most influential bands, come to play the Luther Burbank Center in Santa Rosa on a Monday night? Bands like America or Night Ranger can devolve into has-been dinosaur rock oblivion, but does Morrissey belong with them?

Morrissey may have receded from pop’s indie forefront, but he’s hardly burnt out or a has-been. Morrissey will never be a has-been, not to the millions of fans who slogged through tough and tender times with nothing but tapestries of girlfriends in comas and dead queens to keep them afloat.

And that’s one of the best parts of a Morrissey concert–the crowd itself. Morrissey knows this, and he plays to all of the stalwart followers pressed up against the edge of the stage, taking their gifts (on this night, a custom-bedazzled jean jacket) and hurling bouquets gallantly back into the audience.

He did all his Morrissey poses and flung the cord on his microphone around like a bullwhip–a pouty, erudite Elvis–and people just went nuts. Girls wore their sharpest vintage dresses, and the guys slicked up their hair all big. Today’s youth was underrepresented (those awful teenage years are when we need Morrissey’s parables of self-loathing the most), replaced by yesterday’s youth–mostly grown-up products of Smiths albums.

Mozzer–with flatter hair, age adding character to his face, and a bit more flesh on his body–sang through his solo catalogue, tossing in a fair amount of recent material, which lacked the acerbic punch of his older stuff. But he and his long-time backing band put on a tight, charismatic show peppered with witty between-song banter. He even piped two Smiths classics, “I Want the One I Can’t Have” and “Barbarism Begins at Home.”

All songs met a warm reception, but the older material got more hands waving in the air up front. I wonder how many people were there to see what Morrissey’s doing now, and how many were there just to see Morrissey.

That’s what’s so weird, because Morrissey, new album or no, is still cool. Morrissey: still cool. Hall and Oates: not very cool. They’re all musicians, though, and that’s what musicians do. They play music and sing in front of people, and just because once fresh and spry paragons of rock eras past are not talked about by today’s youthful record-buying public as much as, say, Papa Roach, it does not diminish the impact they made and continue to make, nor does it render their music irrelevant–whether you are Morrissey, Hall & Oates, or the Rolling Stones.

It’s easy for critics to come down on what some may call “nostalgia acts,” because rock and roll culture is youth culture and when crow’s feet and renditions of hits from 20 years ago enter the equation, it can all seem farcical or even pathetic. And while veterans from Neil Young to Sonic Youth continue to grow artistically, and Hall and Oats remain, creatively speaking, frozen in time, they are all doing their jobs as musicians and still rocking away with dignity intact–which, to many fans, is all that matters.