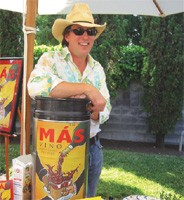 For his 15th high school reunion, Andy Woehl brought a keg to the party. A keg is always welcome, he reasoned, and might even bring back memories of keggers long-gone. Andy’s keg, however, wasn’t filled with beer; it was filled with wine. What better test market for a newly launched product than your graduating class, he figured, and who doesn’t love free wine?

Fresh out of the barrel and into the keg this July, Woehl’s company, Más Vino, may revolutionize the way we look at wine. Woehl and his business partners took a simple premise–that bulk packaging is bad for the environment–and put it toward making a business around something they like to do: drink wine.

With a background that includes time spent working on Fat Tire Ale at the New Belgium Brewing Co. and as plant engineer for Clos du Bois, Woehl was a natural when it came to putting wine in kegs.

“At Fat Tire, it was a lot easier and more efficient, and we made a lot more money doing the keg product as opposed to bottles. Restaurants make more money on them. So why shouldn’t people want to do wine that way?” Woehl reasoned.

Throughout Europe, wine is produced and sold in kegs. Más Vino’s keg supplier, the Schaefer Keg company, controls about 40 percent of the keg market in Italy, which is a half-million kegs annually, says Woehl. He and his business partners are bringing the idea to America.

“When people say, ‘Oh, I went to Italy, I had great table wine!’ that’s keg wine!” Woehl chuckles. “There’s nothing worse than getting an old, oxidized bottle of wine, and with a keg you’ll never have that problem.”

Packaging Más Vino in keg systems, or “mini tanks,” as Woehl calls them, eliminates any contact with oxygen that might prematurely age or damage the wine. Built just like a beer keg, the 20-liter dual-chamber mini tank presses nitrogen gas down on top of the wine, which is then drawn up through a tube from the bottom of the keg, through a pouring spout, and into your glass.

Más Vino guarantees that its wine will remain fresh in the keg for 60 days, but Woehl knows it will stay longer. “I know a girl in Australia who did a test of Sauvignon Blanc, and she was still pouring fresh glasses after 12 months! They just left the keg tapped and sitting on the counter,” he says.

Transporting all that packaging (cardboard, cork, bottle, trash) wastes both materials and gas, so in addition to saving money and energy, selling wine as a bulk product saves the wine itself. Speaking from his years of experience as the plant engineer at Clos du Bois, Woehl says, “On a given day on a bottling line, you’ll lose 1 percent of your packaging material, and between 1 and 3 percent of the wine that was in the tank. It just splashes everywhere!”

Including breakage on the line and other inherent packaging problems, bottling wine individually at Más Vino’s price point ($7 a bottle, wholesale) just seemed wasteful to Woehl and his business partners.

“For high-end wines that are aged, a bottle is still the ideal packaging,” he says. But for the vast majority of the 1 billion bottles that are produced annually in California–11 percent of which are consumed by the glass at restaurants, bars and hotels–wine from a keg just makes sense.

While keg wine may seem like a novel idea, it’s been tried several times before. Giorgio’s Italian Restaurant in Healdsburg still carries Inglenook wine in a keg after 20 years. In the 1980s, Anheuser-Busch launched a Carlo Rossi-style “red Burgundy” wine in a keg called the Master Vintner’s, which failed because “in the ’80s, people just weren’t drinking wine,” according to Woehl. “And the quality just wasn’t there.”

Already found in 25 restaurants in the North Bay, Más Vino appeals to restaurant owners “all over the board, because it’s a new idea,” Woehl says.

“It’s interesting to see who we appeal to and who will try something new, and who won’t,” he says. “I’ve been in high-end restaurants where the wine buyer is really excited about our wine and wants to buy it, but the owner won’t do it because he thinks the perception of wine in a keg won’t fly.”

Because some restaurant owners might think bulk-format wine will be perceived negatively by their customers, Woehl guarantees to buy back Más Vino if it doesn’t sell.

“Changing people’s minds about what’s on their wine list is like getting married or divorced!” Woehl laughs. So for now, Más Vino is keeping it simple. “We have one wine, one package. We don’t want to overwhelm people,” Woehl explains

Made of a blend of more than 120 wines, Más Vino is what’s known as a “virtual brand,” like Barefoot, Blackstone or Smoking Loon. Winemaker Tammy Collins (who spent eight years as the winemaker at Blackstone) “has a lot of experience buying and blending off the market,” says Woehl.

Before boutique wineries came into vogue, buying and blending was the norm. “Traders were the traditional winemakers in France,” Woehl explains. “In the old days, if you were a farmer and you grew grapes, you grew the grapes first and turned them into wine.”

After the finished wine was barreled, the negotiant (or trader) would select from the barrels, buying finished wines from several farmers and then blending and packaging them under one label. The most famous of these negotiants was Georges Duboeuf of Beaujolais fame (who later went on to make his own wine), and this is how the cognac Courvoisier is still made today.

While Woehl insists he’s not trying to “shatter or revolutionize the way people think about wine,” Más Vino, which is based out of Cloverdale, certainly seems like a breath of fresh air in the culture of pretension that can so often surround the wine business.

“People who want to spend a lot of time complaining about how this wine or that wine’s not that great aren’t really the most fun conversationalists,” Woehl smiles. “And after a few glasses of wine people lose their aficionado palates, anyway!”

Trying to “strip a lot of the worry about vintage and appellation” away from the enjoyment process is what Más Vino is all about. “We will tell you all of that information if you like,” Woehl says, “but ideally, we want something that people can just enjoy by the glass, by the carafe, or however it’s being served.”

With a touch of sweetness and a punch of dark fruit rounded out by smooth tannins, Más Vino is a dangerously easy-drinking wine. As a second, then a third glass pour out of the keg perched on one writer’s coffee table, giggling ensues. “There’s a lot more in the keg,” laughs Woehl. “It just keeps coming out!”

Vivacious and fun, Más Vino is like taking a winery tour and tasting from the tank–whether it be by the glass, by the carafe, or standing upside down over the keg at your high school reunion with a lampshade on your feet.