She’s had the idea for a while now, but for whatever reason, didn’t want to really go through with it. This weekend my mom finally took the plunge and got her first tattoo.

When she saw my first tattoo, she shook her head either in disgust or disbelief. My second one, she feigned indifference. But the next time, something changed. I heard she told my sister, regarding tattoos and the stereotype she had associated them with, that I was “above the influence.” Mind you, this was when the commercials featuring the same tagline were running on television, but those were about staying away from drugs, not tattoos. 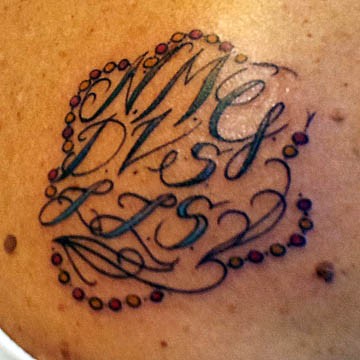 She’s had this drawing in her head of a tattoo for some years now, and for her birthday this weekend decided to get it inked. “Gentlehands” Wes at Monkey Wrench in Santa Rosa was her artist, and he did a good job with the art and working with her. He made helpful suggestions and explained why some of her ideas wouldn’t quite work out (in a very patient tone).

Overall, I think it looks good. It’s her children’s initials in their favorite colors surrounded by Mardi Gras beads. It might need a touch up, but that’s to be expected with color.

By piercing the flesh and leaving ink under the skin she has completed the generational link between her father and her son, both of whom have tattoos and only one of whom regretted it 40 years later. Happy birthday, Mom. Here’s hoping you will regret your tattoo at least 40 years from now, too.