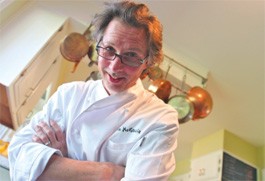 “It’s a very pristine, pure, gorgeous country with amazing food,” McKenzie asserts, standing in the sunlight-drenched kitchen of his Santa Rosa home. “I think people just don’t get what Ireland is. Americans equate Ireland with pubs and fried food.”

McKenzie will be exploring what the media has dubbed the “new Irish cuisine” at a March 17 cooking class in Healdsburg and through a tour of Ireland in July, both sponsored by Relish Culinary School.

And while it’s true that Ireland is filled with pubs and their standard grub, McKenzie says, it’s also filled with culinary riches–a coastline brimming with lobsters, mussels, shrimp and fish, and acres of rich farmland, where the concepts of sustainable eating and Slow Food are entrenched, centuries-old traditions.

“The best smoked salmon in the world comes from Ireland,” he proclaims. “There’s a lot more depth to Irish cuisine than people understand. There’s an incredible amount of bounty there.”

The problem, he adds, stretches back about 150 years ago to the Irish potato famine, when they lost their base crop. “I think they lost faith, literally, in their land,” he muses. In a country of some 8 million people, more than 4 million emigrated, many to the United States.

But Ireland’s recent economic revival as a major player in the high-tech world has led for the first time in more than a century to reverse immigration, with Irish people moving back home, embracing new opportunities and old traditions.

“There’s a resurgence and a new faith in their land,” McKenzie says.

“There’s almost like a world menu right now,” he says, adding that there’s always been great food in Ireland. It’s just that people, especially in the United States, are only now starting to realize that.

“It’s like when California cuisine became a buzz word. I think Irish cuisine is finding it’s own focus.”

McKenzie should know. He launched his career at the beginning of the California-cuisine movement, training under such world-renowned chefs as Jeremiah Tower and Jonathan Waxman. McKenzie, now 50, owned the acclaimed Rover’s restaurant in Seattle, and spent several years in Los Angeles as a successful caterer and private chef. His culinary feats included organizing the Academy of Arts and Motion Pictures’ Governors Ball three years in a row.

After suffering through a number of personal losses, McKenzie wanted a simpler life and a chance to renew his passion for food. In 2000, he and his wife relocated to Sonoma County from LA.

“Being a chef and a writer, this area is just heaven for me,” he enthuses, “all the artisans and all the farms.”

In some ways it’s similar to the bounty in County Cork, Ireland, where his parents, Ava Astaire McKenzie (she’s the daughter of Fred Astaire) and Richard McKenzie, bought a farmhouse 30 years ago. The property includes an 12th-century tower.

“The view from there hasn’t changed,” McKenzie says. “It’s been the same for eight centuries.”

The family enjoys the deep Irish connection to the land and the sea. Ava is the author of My Home in Ireland: Cooking and Entertaining with Ava Astaire McKenzie, and Richard wrote Turn Left at the Black Cow: One Family’s Journey from Beverly Hills to Ireland.

Kevin McKenzie visits as frequently as he can, cooking with his mother in her kitchen and savoring all the local culinary riches. After a trip to Ireland last year, he returned with boundless enthusiasm for all that County Cork has to offer, says Relish Culinary School owner Donna del Rey.

“He came back and said we have to take people there, it’s really an amazing place.”

So Relish, which sponsors a number of local culinary tours, is organizing its first overseas adventure, From Farm to Fork: Ireland Culinary Tour this July.

It will be an insider’s look at County Cork and its modern-day, Slow Food cuisine. A few of the planned activities include visits to Ballymaloe Cookery School on its 400-care sustainable farm and a rare public visit to the family-run Gubbeen Farm which cheeses, smoked meats and organic vegetables and herbs.

“As with our Sonoma County tours, we really will let the artisans speak for themselves,” del Rey says.

The schedule also includes a cooking class taught by Ava and Kevin McKenzie, using mussels harvested from the cove on the McKenzie property, produce fresh from Ava’s garden and other local goodies.

As a foretaste, Kevin McKenzie is teaching a class March 17 in Healdsburg on the contemporary Irish supper. The menu ranges from smoked wild Irish salmon on traditional brown soda bread to that leg of lamb baked in lavender and hay.

Except for a few items such as smoked mackerel, almost all the ingredients used in modern Irish cuisine are easily available in Sonoma County, McKenzie says, from mussels and salmon to artisan cheeses. It’s part of the growing Slow Food movement, where people are more aware of how and where their food is produced.

And it’s a way to reach out to past traditions–real traditions of Irish bounty and abundance, not the stereotypical ones. The corned beef and cabbage dish that many Americans eat on St. Patrick’s Day isn’t even Irish.

“Corned beef and cabbage was actually invented in New York,” McKenzie explains. Irish immigrants wanted to recreate a traditional Irish bacon and cabbage dish, and corned beef by Jewish butchers was as close as they could come.

For a more accurate taste of Irish cuisine both traditional and modern, apparently County Cork is the place to go.

“Cork bills itself as the cultural center of the world, literally–they have signs proclaiming that,” McKenzie laughs.