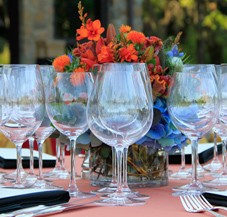 Before his name was plastered on bottles of wine, Fred MacMurray was an actor most famous for roles in Double Indemnity, The Absent-Minded Professor and My Three Sons. Though successful, MacMurray, referred to by friends as “the thrifty multimillionaire, remained humble, driving a VW squareback and bringing a brown-bag lunch to . (MacMurray was generous, though—in the 1950s, he called up Hugh Codding, developer of Montgomery Village in Santa Rosa, to offer a wooden covered wagon from his ranch for Codding’s new shopping center, where it remained a landmark for decades.)

MacMurray’s original intent when purchasing land in the Russian River Valley in 1941 was to establish a cattle ranch. The property remained in this form until MacMurray’s death in 1991, which led E. & J. Gallo to purchase it five years later. Keeping its wine under the label MacMurray Ranch and hiring MacMurray’s daughter, Kate, as spokesperson, the company is now one of the largest sellers in the industry.

This year’s highlight of Sonoma Wine Country Weekend, Taste of Sonoma occurs at the now historic MacMurray Ranch. Kate, who still lives on the ranch, invites attendees to indulge in cuisine provided by over 60 chefs and sip vino from over 200 wineries. With wine seminars, cooking demonstrations and more, Taste of Sonoma delivers one of the best glimpses into the wine country. Catch this perspective Saturday, Aug. 31, at MacMurray Ranch.
9015 Westside Road, Healdsburg. $165–$175. 11am–4pm. 800.939.7666.