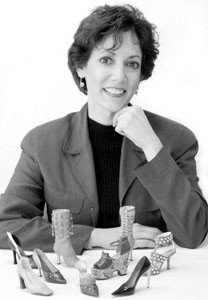 Thinking Outside The (Shoe)Box: Raine has a closet full of shoes any (very small) woman would die for.

Unusual occupations breed unusual habits. The jeans-clad woman in the burgundy jacket–the one arranging tiny shoes on the table in preparation for a photo shoot–is a prime example. Known to the universe by the single name Raine, the supremely confident North Bay-based dynamo who scurries around before me is the same meticulous sculptor whose hands have created every one of those tiny ceramic shoes–and hundreds of thousands just like them.

You’ve seen the shoes, right? In gift shops and department stores and just about everywhere else, Raine’s creations, marketed under the name “Just the Right Shoe,” are a collectible-world phenomenon. The whimsical miniatures have been around for exactly five years now, manufactured and distributed by Willitts Designs in Petaluma, appearing in a total of 222 different styles from snakeskin boots and cork-soled sandals to disco heels and rainbow-colored tennies.

Few are bigger than four inches long. Each is designed to resemble a right-footed shoe. All are given clever names–Rosie Toes, Suffragette, Bovine Bliss–that frequently involve puns. They usually sell in stores between $12 and $24. Like the woman who invented them, they are a certified phenomenon.

The details are obsessively exact, right down to the hint of Velcro peeking out from under the crinkled-leather strap on an elegant, crescent-moon-adorned dancing shoe. Every tiny shoe gives the appearance of having once had a tiny foot inside it, doing wonderfully tiny things in a tiny and magical world.

So it’s no surprise when Raine, settling into a chair in Willitts’ spacious conference room after the photographer has at last been excused, laughingly admits that becoming a world-famous shoe designer has given birth to an unexpected side effect.

“I now spend a lot of time looking at people’s feet,” she says. “It’s embarrassing sometimes, but I do. I’m always sneaking peeks at other people’s feet. And when I’m not doing that, I’m studying the history of shoes. I know more about shoes and feet than I ever imagined there was to know.”

Raine’s own feet, for the record, are covered this afternoon in a pair of soft-yellow leather clogs, each adorned with a Japanese geisha painted on the leather with digitally injected dye.

“Aren’t these cool?” she says, slipping one off and handing it over. “I used to wear very boring shoes, but my fans like to see me in something more interesting now. Whenever I go out to meet my fans,” she adds, eyes widening along with her smile, “they want to see me in painful shoes. They want to see me in . . .this.” She picks up a stiletto-heeled disco shoe.

Ouch. Even at full size, if such a shoe existed, the thing would be uncomfortable to wear. But it would make an impression.

“Until I became known as a shoe sculptor, I was pretty much the typical artist,” Raine says. “I mostly wore sneakers and jeans all day, the standard uniform of the struggling artist with no money.”

“Struggling” and “no money” are certainly not terms that can be applied to Raine these days. Since its unveiling, the “Just the Right Shoe” line has earned revenues approaching $100 million. Not at all bad, especially when you consider that Raine (a shortened version of her given name, Lorraine) was originally told by the executives at Willitts that her funny little shoes had no marketing potential. Fortunately, says Raine, a group of female employees were shown those first two samples: an exact replica of her husband’s Vietnam War combat boot, and a red high-heeled pump (presumably not her husband’s). The employees’ over-the-top reaction, cooing and squealing and competing to hold the shoes, convinced the skeptical execs to reconsider.

It’s an especially astonishing story given that, until then, Raine had given little thought to shoe styles–or feet–at all.

“I never knew I was a shoe designer,” she says, “until after I’d started designing shoes.”

An accomplished artist for much of her life, Raine earned a degree in illustration from the University of the Arts in Philadelphia, back when she was still thinking of herself primarily as a painter. But by the time she graduated, it was the life of a sculptor that she found herself dreaming of.

“So then I had to learn the mechanics of sculpting, armature, and casting and molds and all that,” she explains. “It was a bit of an adjustment, technically, but I found that, artistically, all the same things apply. So for me, moving between human forms, animals, inanimate objects–it doesn’t matter.”

While it might seem that a classically trained artist would grow weary of making little shoes all day, Raine insists that she’s anything but bored.

“After five years of designing these,” she says, “I’m not running out of ideas. If anything, they’re getting better. They’re getting more inventive. Which is kind of a surprise. Who knew I’d be enthusiastic about shoes for this long?”

The enthusiasm runs both ways.

There are numerous websites devoted to Raine’s shoes. Many collectors follow the current marketplace trend of selecting only those items from the series that most appeal to them personally or that tie in to some decorating scheme at home or office, but there are plenty of fans whose goal is to own every single shoe–which is not an easy task. Since styles are routinely discontinued (remember Beanie Babies?) some old styles can fetch as much as $1000 on the resale market.

“What I find most interesting about the shoes,” she goes on, “is that they’re made to look not new. They’re not out-of-the-box shoes.” She picks up one of them from the table, a boot with leopard spots, and gives a guided tour of its faux age marks. “Here’s where the ball of the foot has stretched it out a bit, and over here, wrinkles have gathered up around where the ankle moves. You know somebody has worn this, because if it was right out of the box, it would all be smooth and unmarked. You can actually see that a foot has been in here. That’s where my anatomical training kicks in.”

Asked if she has ever, just for yucks, whipped up a left-foot shoe, Raine’s eyes light up.

“I haven’t . . .yet,” she says. “But I have thought about it. I’ve imagined doing a special series of shoes called ‘What’s Left?'”

“When I started this, I never expected that they’d become, you know, this successful. I mean, looking at them, they’re beautiful, and they’re detailed, and they’re fanciful, and . . .”

“Well, some of them do push the envelope a bit. I mean, this one is called Love Hurts,” she says, lifting up a slinky red-and-black number with a heel that looks like a stake through the heart. “My mother would never have let me wear a pair of shoes like these,” she laughs, setting down Love Hurts and picking up Red Hot, a vaguely S&M-tinged leather sandal covered in gleaming studs. “There are some very respectable stores selling these shoes,” she says, nodding when it is suggested that such shoes would be well-received at San Francisco’s Exotic Erotic Ball–the shoes and nothing else.

“Yes! Yes!” Raine laughs. “And, obviously, one wouldn’t need to wear anything else if they were wearing these shoes.”