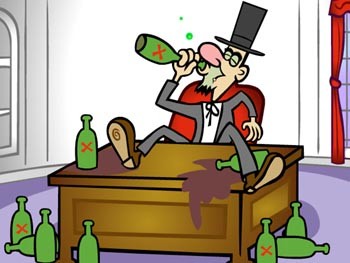 A LITTLE OLD lady once told animator Chuck Jones that she didn’t see why Bugs Bunny needed writers when the rabbit was funny enough as he was. I’d be surprised if writers for The Simpsons don’t hear the same thing.

Mike Reiss is a writer/producer on The Only Show That Matters, and he’s coming to Sonoma State University on May 15 to discuss how to write for television. Though, as he says, “why would you want to?”

Reiss’ long career in comedy stretches through three different media. In the early 1980s, Reiss was a writer on the dangerously funny satirical magazine National Lampoon. From there he helped script such programs as The Larry Sanders Show and ALF.

Did writing for ALF entail watching Jerry Stahl shoot up? (Ex-ALF writer Stahl’s book Permanent Midnight recounted his heroin use on a thinly veiled version of that puppet show).

“Believe me, you had more to do with the writing for ALF than that man did,” Reiss told me. “Stahl wrote two very bad freelance scripts, and the first script was rewritten from top to bottom.”

In addition to his TV jobs, Reiss is also a dotcommer. He wrote a capital piece of Simpsonsesque jackassery on icebox.com: , chronicling the boozy misadventures of Honest Abe. This scurrilous Internet cartoon was democracy at its best: let there be no man in this country too great to be hauled through the mud.

“I actually studied up, ” Reiss says. “Lincoln was quite a character. Clinton-like. Not as amoral, but a devilish politician. One episode was close to history–Lincoln actually took Frederick Douglass to the theater and said a lot of tactless, terribly patronizing things about black people.”

In Reiss’ version, Lincoln tries to ingratiate himself with Douglass, the famous black abolitionist, by talking like a nigga: “Go OJ on that bee-at-tch!” he yells at John Wilkes Booth doing a performance of Othello.

Reiss seems to prefer his other icebox.com feature, Queer Duck, featuring a fey mallard (soon to be roosting at show.com with his funny animal friends Oscar Wildecat and Openly Gator).

Though straight himself, Reiss wanted to do a gay sitcom because he’d heard that HBO’s Sex in the City had a core audience of gay men who enjoyed pretending that the heroines were all really drag queens. (They aren’t?) Queer Duck was icebox.com’s first and only hit before it folded, a victim of the Internet bust.

I was rabid to find out how The Simpsons is concocted, but Reiss assured me it was a boring story.

“Nobody’s really interested in the nuts and bolts of it,” he says. “These lectures of mine used to be pure information, and now they’re pure entertainment. I guarantee you’ll laugh for an hour and won’t learn a thing.”

“Someone will have an idea, it’s rewritten collectively by about eight people, and given eight different rewrites,” he says. “We go meticulously over line after line. The staff’s very affable. However, you do need to get used to the idea that nine out of 10 gags will not be used, so never be wedded to a joke. I

“f someone’s turned in a great script, maybe 60 percent of it will make it to the show.”

Reiss says the biggest challenge in working on The Simpsons is the search for new story ideas. After all, the show has been on the air for 12 seasons.

“We do get complaints that the newest episodes are weird, but we’ve done all the normal premises already,” he says. “You have the constant question of what do you do with Bart, who’s done everything a 10-year-old boy can do, including working in a brothel.”

The common remark made about The Simpsons writers is that they were more like Lisa than Bart as kids. Reiss agrees: “Half the staff are Harvard people,” he says.

The cerebral humor of these Ivy Leaguers (Reiss edited the Harvard Lampoon) turns up in a composty mix with slapstick. Thus Homer’s recent tangle with a frenzied badger might be back to back with satires of esoteric movies like Run Lola Run and Go.

“The show would be a dismal flop if the audience was nothing but people tuning in for the smart satire,” Reiss says. “We’re guaranteed an audience because of the kids.”

That was the case, too, with a show Reiss created called The Critic, which was not a success.

“Whether ABC or Fox broadcast it, it was moved all over the TV schedule,” Reiss explains. “But wherever it was moved, it was the No. 1 show with kids because they watch cartoons.”

Reiss seems like a remarkably happy man, considering that he once endured writing for Johnny Carson.

“When I got that job,” Reiss remembers, “I was told that everyone was routinely fired after three months. I made it 18 months, and then got fired. It was like working for an insurance company. You had a quota of 60 jokes a day. At the end of the day, you were a spent, serious man.”

As hard-boiled fans might have guessed, the grim office life in the “Itchy and Scratchy” headquarters on The Simpsons is actually based on a TV writer’s life. “Those scenes are our only indulgences as writers, ” Reiss says.

His own experience in TV is mirrored in Krusty the Klown’s frequent battle with executives, laced with made-up Yiddish profanity: “them and their farkakta ‘network notes!’ . . . I don’t need 12 suits telling me which way to pee!”

In real life, these were exactly the kind of situations that drove Reiss out of TV writing. His last project before he quit was to create and develop a show called Teen Angel for ABC.

“It was getting worse all the time.” Reiss said. “There were 11 network people, and they all had to have their input on the script. When it was finally broadcast, I couldn’t stand to watch it.”

But Reiss is staying with The Simpsons. The show has signed on its cast for another three years.

Whether it’s going uphill or downhill or in both directions at once, The Simpsons is still the funniest show in the history of TV–and a collective work of art in which Mike Reiss continues to participate.