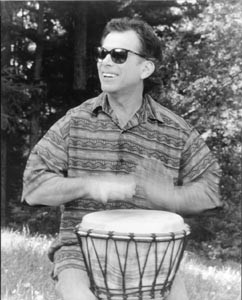 WHEN THE GRATEFUL Dead disbanded after the 1995 death of bandleader and guitarist Jerry Garcia, it might have seemed like a good time for the surviving band members to step back from music after three decades of steady activity. But former Grateful Dead drummer Mickey Hart is, if anything, busier than ever.

The Occidental resident’s post-Dead projects have included Mystery Box, a 1996 CD that combined grooving pop music with the vocals of the female a cappella group Mint Juleps. He also regrouped his trailblazing percussion/vocal ensemble, Planet Drum, to record Supralingua, a 1998 follow-up to that group’s acclaimed 1991 self-titled CD. He then joined forces with Grateful Dead bandmates Bob Weir (guitar) and Phil Lesh (bass) and frequent Dead guest musician Bruce Hornsby (keyboardist) in the Other Ones. That band, which also includes Dave Ellis, Stan Franks, and drummer John Molo, headlined the 1998 Furthur Festival, an outing that marked the first time Hart, Weir, and Lesh had played Dead material since the demise of the group.

Last year, Hart also co-authored and compiled a book, Spirit into Sound, an entertaining and enlightening collection of quotes from musicians from around the world reflecting on the magical power of music. Hart released a CD with the same title as a companion to the book.

“It’s sort of the soft side of Planet Drum [a similar collection of drum-oriented world music], the soft, gentle romance side of drums,” Hart says of the Spirit into Sound CD. “I was listening to the nature spirits while I was doing that. It was just a companion to the book. Nothing more and nothing less. . . . I just wanted to have some relation, a nonliteral connection to the book. It’s gentle, sort of spiritual, very beautiful and soft. That’s the way I look at these quotes.”

The band performs Aug. 5 at the Marin Summer Music Festival.

“It’s the best time I’ve ever had, in recent memory,” Hart says of the shows his new band has played so far. “I have to say the chemistry is certainly part of it. The music is just extraordinary, it really is, better than I had ever anticipated.”

CONSIDERING that Hart’s 20-plus years in the Grateful Dead, along with his Planet Drum and Mystery Box projects, certainly qualify as some of the greatest adventures a musician could hope to have, Hart’s praise for his new band is no small statement.

Hart says he put together the Mickey Hart Band as a vehicle to reinterpret some Grateful Dead material. And while he clearly wanted to put a different rhythmic spin on the songs, he was looking for a band with a rock ‘n’ roll attitude.

“I had the urge to revisit some of the old Grateful Dead material and reset it, stay true to the melody and the words, but musically I wanted to put it in a new context, and that wasn’t Planet Drum,” Hart says. “That was exploring the world’s rhythm on the periphery. That’s a different kind of machine. So I sort of wanted to change the pace of this, do a little more rocking. That was the reason.

“This is like rock ‘n’ roll, almost. I mean it is, and then it isn’t. It’s like a new hybrid,” Hart says. “And I’ve never really sung as much as I’m doing now. And I wrote a lot of new material for this band. So that makes this really different. The Planet Drum stuff was rhythmic oriented; it was in what we call the supralingua, which is like phonetic–[the vocals] didn’t have any literal translations. This is quite different. And it’s really easy and it’s fun. Everybody is really having a great time with playing deep grooves. This is really surprising people. We’re having double, triple encores.

From the July 27-August 2, 2000 issue of the Sonoma County Independent.