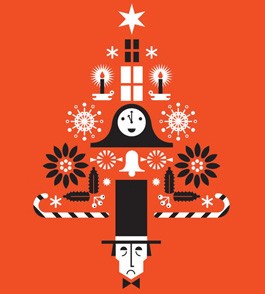 Oh, I get it. That incessant jingle-bell sound I hear all around me is not Santa in his sleigh, arriving early for a strategic, pre-Thanksgiving delivery. It’s local cash registers warming up for Black Friday, that annual day-after-Thanksgiving milestone in which most retail businesses finally cross over from being in the red to be being in the black. Sure, we all hope our economy will recover soon, but all of this forced frivolity and predictably prepackaged proliferation of happy holiday hypnosis is enough to make any sane American snap his freaking tinsel.

Yep. All of those plastic trees and canned music are impossible to escape. But there is one way to retain one’s sanity through it all. That’s by surrendering to the holidays, choosing one’s own path of descent into the all-consuming annual attitude people call “merry.” One way to ease into the madness is through the magic of theater. Fortunately, the North Bay theater community has lined up a heapin’ helpin’ of holiday entertainments to dazzle and amuse as we succumb to the siren call of Christmas.

Let’s look at a few highlights, beginning with several variations on the same time-honored theme: Charles Dickens’ Christmas Carol. Like clockwork, Dickens’ inspirational ghost story appears every year, served up across the Bay Area like so many Christmas geese. Fortunately, which so many Carols competing for audience attention, North Bay theater artists always go above and beyond to bring something fresh and new to the story of nasty old Ebenezer Scrooge and his long Christmas Eve among the spirits. This year, all of them seem to be running concurrently, from Dec. 3 to Dec. 19.

Let’s take them in alphabetical order.

At the Imaginists Theater Collective, housed in a funky storefront at the edge of Juilliard Park in Santa Rosa, A Christmas Carol gets the taken-apart-and-put-back-together treatment the Imaginists have become known for. Few details have been released, but posters feature prominent images of chains (“I wear the chain I forged in life!”) and fire (hints of hellish damnation?), and local madman-mime Eliot Fintushel is a member of the cast, so it should be interesting.

Odyssey Theater, now headquartered at the Spreckels Center in Rohnert Park, is offering up Christopher Durang’s twisted comedic spin-off of Carol titled Mrs. Bob Cratchit’s Wild Christmas Binge. A dark but funny alternative version of the beloved tale, this variant directed by Carl Hamilton includes an obnoxiously goody-goody Tiny Tim, a Christmas Spirit who can’t do anything right and a surprise romance between Scrooge and the equally disgruntled Mrs. Cratchit.

In Sebastopol, the Sonoma County Repertory Theater—long attached to Carol, having annually performed its own version to popular acclaim—is changing things up too, premiering a brand-new adaptation by playwright Jon Tracy, directed by Scott Phillips. The new version promises to ratchet up the emotion of the story with an even meaner Scrooge, a scarier Marley and no doubt an even more uplifting climax. (Say it with me: “God bless us, everyone!”)

The best feature of the Christmas Carol production slotted to run Dec. 3&–18 at the Cloverdale Performing Arts Center is that the show—employing another new adaptation, this one by Jerry Patch—will be the first to take place in the center’s long-planned new facility (really, really long—as long as Marley’s ponderous chain). It should be a great opportunity to visit the beautiful new building while the place still has that Christmas-y new-paint-and-carpet feeling.

As crazy-glued on to the face of Christmas as A Christmas Carol is, there are other holiday tales just as permanently affixed on the end-of-the-year calendar. It’s a Wonderful Life continues to show up in various forms, and this year it’s Pegasus Theater with the most entertaining spin. Having found a new home at the historic Rio Nido Lodge (where Hollywood elite once gathered for some upstate R&R), Pegasus is taking us back to Christmas Eve, 1947, imagining a live radio broadcast of It’s a Wonderful Life, with music and sound effects to bring to life the story of manic-depressive George Bailey, who teams up with an inept angel to save Bedford Falls from the evil Mr. Potter. The show opens Dec. 3 and runs through Dec. 19.

That old-time radio theme seems to be in the air at the moment, because not only has Sixth Street Playhouse just opened the much-loved 1940s Radio Hour, a radio-themed musical-comedy, on its main stage, the company will be bringing back last year’s smash holiday hit Ham for the Holidays. Written, directed and starring Shad Willingham, the slapstick farce takes place in a tiny radio station on Christmas Eve, where the ramshackle crew is waiting for the arrival of Orson Welles. Promising he’d lend his voice to the station’s new Christmas radio play, Welles’ presence looms large over the show, though he never technically shows up. What the dim-witted desperados do to fill his shoes is hysterically funny and, yes, even a bit heartwarming.

And finally, speaking of returning traditions, after packing houses the last couple of years, local actor David Yen (aka Crumpet the elf) now owns David Sedaris’ wicked SantaLand Diaries much in the way that Mr. Potter owns Bedford Falls. Once again directed by Argo Thompson, the naughty solo show—about one man’s elf-costumed foray into the world of a department-store Santa Land—will play in Marin and Sonoma counties. Beginning at the Marin Arts Gallery in San Rafael (Dec. 11 and 12), the show then moves to the Glaser Center for one night only on Dec. 17.

Good for Crumpet. And good for us.