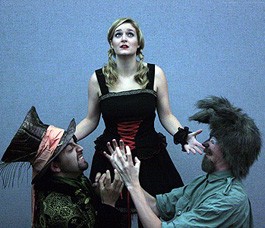 Wonderland, as a vacation destination, has always been a bit sketchy, full of crazy people with violent urges. So in the original play Alice: The Rebellion of Wonderland, presented by Narrow Way Stage Company at the Spreckels Performing Arts Center, it’s a little surprising that Alice—now a contemporary teenager with a miserable home life and a tendency toward kleptomania—keeps thinking of Wonderland as the beautiful and friendly place she once visited and longs to see again. In Tony Ginesi and Merlyn Q. Sell’s original script, the point that Wonderland exists as a questionable alternative to Alice’s ugly reality gives us a large helping of psychological meat to chew on, and this dark but funny, theater-punk twist on Carroll’s tale is full of invention and insight—and some truly hilarious puns.

Directed by John Browning with a notable emphasis on character (but perhaps not enough emphasis on pacing and consistency of tone), this edgy adaptation does interesting things with the notion that Wonderland is a figment of Alice’s imagination, and that whatever she has been feeling in the real world has become a part of Wonderland as well. When Alice (Autumn Mirassou, appropriately angsty), follows the White Rabbit through a kitchen cupboard, she finds herself locked behind bars in the Red Queen’s prison, quickly realizing that things in Wonderland aren’t quite as she remembers them.

For one thing, no one remembers her, and the Red Queen has imprisoned much of the country, breaking their spirits by stealing all of their best-loved possessions. Alice quickly encounters her old, now completely miserable friends, from the quarrelsome Tweedledum and Tweedledee to the easily confused Mad Hatter. Humpty Dumpty even comes along for the adventure, as Alice gradually moves closer to a climactic encounter with the Red Queen, and her own real-life fears.