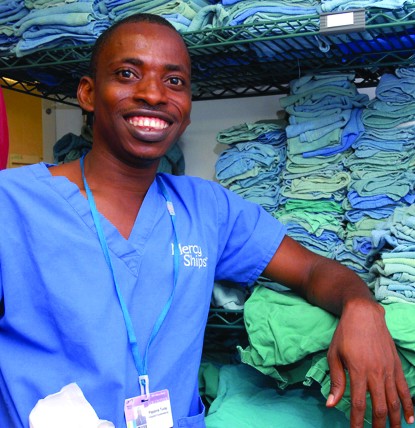 So, you want to be a radical?

A recently spotted bumper sticker quotes the late professor Raymond Williams, a Welshman who brilliantly observed, “To be truly radical is to make hope possible rather than despair convincing.”

From the smallest individual act to large-scale ventures, making hope possible is bigger than personal. Williams was referring to radical as it pertained to social action. Pseudo-radicals pose for photo ops, but genuine radicals typically work hard doing something nobody else can or will do—they swim against the current of a fear-based culture. That metaphoric swim often takes the literal guise of an inconvenient journey.

For some, it’s a road trip. Yvonne Baginski has perplexed some and irritated others of her neighbors in Napa over the years by making her porch a collection place for donated medical supplies. She and others have packed up the stuff and driven down to Mexico time after time to get the supplies into the right hands, where suffering people could be better served.

For others, the journey may be a sort of cruise that does not include room service; Mercy Ships travel from ports in the U.S. and Europe to nontourist destinations to deliver the free services of medical professionals, water engineers and agriculturalists to the poor. The ships bring full hospital services to places where there is only one doctor for every 20,000 people.

One of their ships, the largest cruising hospital in the world, is the Africa Mercy, a 499-foot vessel that carries medical professionals, beds for 78 patients, operating rooms and an intensive care unit. When this ship comes in, suffering people are greeted by a volunteer crew from 30 nations. A series of ships has brought hope for almost 35 years to ports including Sierra Leone, Ghana, Togo, the Canary Islands, Guinea and beyond.

Imagine waiting up to a year, in pain, for your ship to come in.

What Baginski and the Mercy Ship group have in common is that they choose to act in socially radical ways, on small and large scales, to make hope possible where hope once seemed impossible. This kind of radicalism is a standard to hold up to the world and to the neighbors, even those who are not ready to take a radical journey themselves (or to tolerate a pile of crutches and boxes of medicine stacked up chaotically on a porch in suburbia).

Despair breeds a paralysis that can only be cured by hope. And hope must be made possible by individual acts—things done by people who are willing to journey inconveniently.