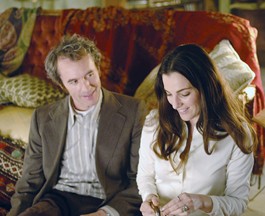 An early scene in Fugitive Pieces, featured as the first film in the Sonoma County Jewish Film Festival, shows its protagonist, Jakob, tenderly holding a manuscript with the weighty title Bearing False Witness: History and Memory. This is a film that deals with the legacy of the Holocaust, but as Jakob’s manuscript suggests, it is less about the grisly events of history and more about what it means to remember them.In recent years, considerable cynicism has surrounded any film dealing with the Holocaust. With the tremendous glut of works that draw on the Nazi’s atrocities—The Reader, Defiance, Valkyrie, The Pianist and so on—and their generally high rate of winning Oscars, the backlash makes some sense. However, director Jeremy Podeswa’s Fugitive Pieces, based on Anne Michaels’ acclaimed novel of the same name, addresses why we have so many films that look back at the horrors of the past. For some, there’s no other choice.Fugitive Pieces jumps around in time and space throughout an entire life. The film begins with Jakob as a boy in Poland witnessing the brutal abduction of his family by Nazi soldiers, and travels with him as he’s discovered by an archeologist and relocated to Greece and eventually Canada, where he struggles as young writer coping with his early trauma. Through the reflexive gaze of the adult Jakob, played with terrific composure by English actor Stephen Dillane (Thomas Jefferson in HBO’s John Adams), we see that trying to bear witness to the past often means an inability to live in the present; that loving those we have lost can prevent us from loving those who are right in front of us.

Unlike other films that walk similar thematic and historical ground, Fugitive Pieces takes an incredibly delicate and subtle approach to historical tragedy and personal loss. With its quietness and lack of real drama, Fugitive Pieces slipped by without much attention when it was released in 2008, and certainly no nods from Oscar. Maybe that’s because it’s a film that’s less about how people are killed and die, and more about how we should try to live. Fugitive Pieces screens Sept. 30&–Oct. 1.

Other entries to the SCJFF also delve into that difficult space of history and remembering. The documentary Waves of Freedom consists of interviews with some of the surviving 27 American volunteers who, in 1947, sailed in a dilapidated ship containing 1,500 Holocaust survivors past a British blockade of Palestine. Waves of Freedom, screening Oct. 6 and 8, also consists of archival footage and interviews with British navy men who were ordered to stop this small mission at all costs.

The festival turns its retrospective eye on 1960s London in the coming-of-age drama Wondrous Oblivion. This film tells the story of David Wiseman, a Jewish teenager who more than anything wants to play cricket like a pro. This adolescent dream and his neighborhood’s homogenous tranquility get disrupted when a Jamaican family moves in next door.

Screening Dec. 1 and 3, Wondrous Oblivion takes a complicated and thoughtful look at race, religion, immigrants and, of course, cricket.Other films in the SCJFF include The Debt, a thriller about Rachel Berner, an Israeli agent set to assassinate a former Nazi (Oct. 20 and 22); Refusenik, a documentary about the American grassroots movement to free Soviet Jews (Nov. 4&–5); and Blessed Is the Match, which documents the story of Hannah Senesh, a Hungarian Jewish poet, resistance fighter and the “Israeli Joan of Arc” (Nov. 10 and 12).

For these films, the past hasn’t even begun to pass.