.Meet The Crazy People Who Started Lining Up at 3am for Pliny The Younger 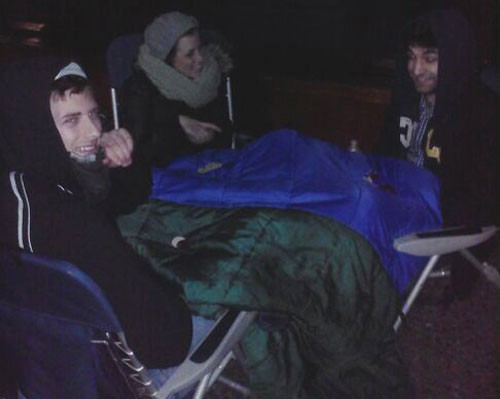 It’s 4:30am outside the Russian River Brewing Co., dark and early, and I have to wonder: who the hell would be up this early if they didn’t have to be?

I often work early at my coffee shop job, and usually don’t run into anyone on my way to work. But as I ride my bike down Fourth Street this morning, three people sit in fold-out chairs wrapped in sleeping bags. Twenty-two year-old Kristen Halsing, 23-year-old Matt Regan and Will La Branche are here—sleepy, cold, and eagerly awaiting this year’s release of Pliny the Younger.

The three, from San Rafael, are the first in line for today’s big event. Halsing and Regan were both up at 1:30am to wait in line by 3am. La Branche was so eager, he woke up at 11:30pm. Hey, it happens—when the oft-rated No. 1 beer in the world is on tap.

Hundreds of hopster enthusiasts will soon file behind them, anxiously waiting along Fourth Street, and by 9am, the line manages to wrap down the street and around the corner. Yet most don’t mind the line, remarking that it’s always a guaranteed good time. Fifth-year Younger attendee Mike Von Miedema—who likes to go by “the Drinking Dutchman”—says, “The line’s a piece of cake. I’ve had some of the best times of my life. Met some really cool people, got a blind date once, played some Frisbee and snuggled a 200-pound man in line when I was cold.”

After the doors open, I’ve never seen the brewery so packed with customers and staff. Angie, a server, wasn’t even on the schedule to work today, “but I threw on a shirt and said, ‘I want to work.’”

I catch up with Halsing, Regan and LaBranche at the brewery in the light of day, seven and a half hours after meeting them at 4:30am. Halsing says they spent the time playing poker, eating Wheat Thins and chatting. “It’s hard to believe I spent seven hours in line,” he says. “I have no concept of time. All I know is this beer tastes amazing right now.”

The triple-IPA, 10.5% Pliny the Younger is available seasonally at the Russian River Brewing Co. for the first two weeks of February in half-pint glasses for $4.50—plus a long wait in line.

Next ArticleImmigration Reform in Napa