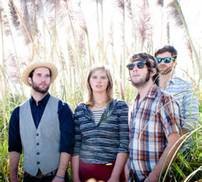 Back in the days when cassettes ruled the world, if I really liked a song, I would record it over and over in order so that I could listen to it on repeat without rewinding. “I’ve Got Something I Can Laugh About,” by Bay Area indie pop band Ash Reiter, is a song that bears repeating, and would have definitely had a cassette entirely to itself back in 1986. Led by Sebastopol-bred Ash Reiter, the Berkeley-based band has exited the singer-songwriter ghetto and entered the sweet spot with their latest album, Hola, which showcases the frontwoman’s lush, swoon-worthy vocals all wrapped up in effervescent pop melodies. It might be a cliché, but this truly is a band that you want to see now, so when they hit the big time, you can say, “I knew them way back when . . .” Ash Reiter puts the pop in pop on Wednesday, May 15, at Lagunitas Tap Room. 1280 N. McDowell Ave., Petaluma. 707.778.8776.