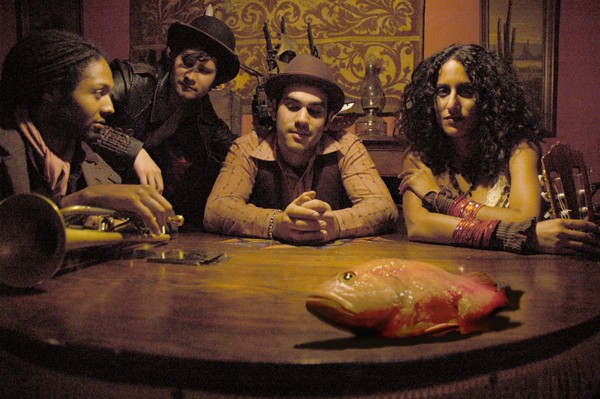 Rupa and the April Fishes, touring by bike

With all the heavy loading, road travel, staying up late and waking up early—only to do it all again the next day—touring with a band is hard enough. Doing it by bicycle? Impossible!

Not so, says globally inclined San Francisco band Rupa and the April Fishes. To prove it, the Roma-French-Hindu-Latin fusion band fronted by physician-by-day Rupa embarks on the 10-stop Bay Rising Tour this week, which has them biking around a 200-mile radius. The tour is almost entirely human-powered; a bike-powered sound system will keep the band amplified at shows. (Lucky volunteer pedalers from the audience provide the leg muscle.) Interested cyclists are also welcome to ride alongside the band members as they bike from stop to stop, all part of their desire to “learn about the dynamics of the San Francisco Bay bioregion in an adventurous, sociable and direct way.”

In addition to playing at a local worker-owned cooperative, the band makes a stop at San Quentin, where they’ll sing for inmates. With Rupa and the April Fishes’ frenetic, political, party jazz style, it’ll take a lot of pedal and people power to keep up. The Bay Rising Tour rolls up on Thursday, April 26, in the plaza in front of Arizmendi Bakery (1002 Court St., San Rafael; 6–9pm; 415.456.4093) and on Thursday, April 26, at the Sausalito Seahorse (305 Harbor Drive, Sausalito; 9pm; 415.331.2899).