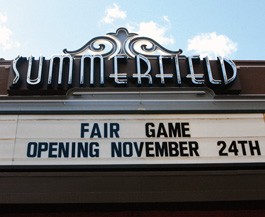 Those maddened by the lease takeover of the Rialto Cinemas building earlier this year were quick to point to the irony of a film, showing at the time, called The Art of the Steal. Now, as if in pointed response, the marquee at the newly christened Summerfield Cinemas offers its opening-day title: Fair Game. And though a bitter taste still lingers for some over the closure of the Rialto, new tenant Dan Tocchini pledges to stick to the independent format and hopes to erase the bad memories of the Rialto’s closure, which caused a strong public response ranging from sadness and nostalgia to outright anger.

After a nearly three-month closure, a variety of alterations have been made to the building, including earthquake retrofitting, a new roof and large murals in the lobby of Hitchcock filming Shadow of a Doubt and The Birds in Sonoma County. Jan Klingelhofer of the Smith Rafael Film Center in San Rafael has been brought in to book independent and foreign films. According to Tocchini, who also owns the Roxy Stadium 14 multiplex in Santa Rosa and nearly a dozen theaters across the state, changes have been made to not only bring the building up to code but to make for what he calls a more pleasant and comfortable moviegoing experience.

“There are all new rocking chair loges, new sound and new projectors,” says Tocchini. “It’s been done over nicely, and we’ll still play the same format of art and independent films.”

Since the Rialto’s closure, Tocchini’s Third Street Cinema in Santa Rosa has shown independent films, but with Summerfield Cinemas opening, the old UA6 will finally be a true second-run theater. “On the day we open, Third Street will go discount commercial,” Tocchini promises. “Tickets will be $3 for first-run films once they finish their run.”

The name “Rialto” is still firmly embedded in the vernacular of Sonoma County residents. Rialto owner Ky Boyd has succeeded with his “Rialto on the Road” series, featuring broadcasts of the Metropolitan Opera, as well as his partnership with the Jewish Film Festival.

Despite lingering feelings of animosity, Tocchini says he’s excited. “It’s going to be a better, safer facility, with better benefits, plus more.” The curtain goes up this week at Summerfield Cinemas, 551 Summerfield Ave., Santa Rosa. 707.522.0719. www.summerfieldcinemas.com.