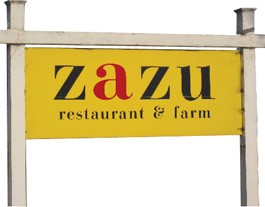 It’s no secret that for budding young farmers, getting into local established farmers markets can be tough. Not only is the admission process fraught with favoritism, but fees apply as well. Duskie Estes, co-owner of Zazu Restaurant & Farm, has a different idea. “We decided to open our property to farmers with no booth charges,” she says, “and, ideally, no politics.”

With participants like Harmony Farm Supply and Ceres Community Project, the weekly event in Zazu’s gravel parking lot also hosts workshops with local farmer Maile Arnold—last week’s was tomatoes; this week’s is preserving and jarring fruit with less sugar using direct sunlight. Hand silk-screened Victory Garden posters from Portland artist Joe Wirtheim and local acoustic music add to the atmosphere, but it’s the hands-on knowledge that’s the focus, with instructional pamphlets placed with every vegetable start sold. Additionally, “there’s a farmer there who can answer questions about how to care for the plants,” notes Estes, “and then there’s a chef there who can tell you how to cook it.”

The most immediate reason to check it out? Zazu’s own BLTs made on-site ($11), with peach bellinis ($9) and gelato from sister location Bovolo ($3.50). Mmmmm. And while the Farm Stand is only scheduled through August, both Estes and Mitchel say it could extend into September, depending on interest. “I definitely think there’s room for more markets,” says Mitchel. “Just look at the business that Whole Foods does, or even the farm stand on Fulton that’s selling seconds—I heard they did 300 grand last season.”

June 21: The Cove at the Smith Rafael Film Center