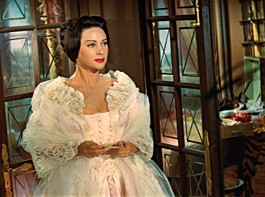 'Lola Montès' and the burden of perfection

Don’t be intimidated by Lola Montès. Yes, it’s the kind of movie they don’t make movies like anymore. But honestly, they never did. Only Max Ophüls did. And only once. And then he died.

Arguably, it was Lola Montès that killed him. The 1955 film, Ophüls’ first color production—an opulent, romantic costume epic in vivid Cinemascope—had the terrible fortune to be both a budget bloater and box-office revenue shriveler. Thus was it forcibly gutted and resequenced by panicked producers, and history has since recorded several competing versions of the thing in three languages (French, German and English) and, as of the new Cinémathèque Française restoration currently in limited American release, five distinct lengths (the original was 140 minutes, which, for context, should be pointed out is exactly as long as The Dark Knight).

The ambition and the heartache of this film understandably wiped its maker out, who didn’t last long enough to read the influential Village Voicefilm critic Andrew Sarris’ 1963 comment, “In my unhumble opinion, Lola Montès is the greatest film of all time, and I am willing to stake my critical reputation on this one proposition above all others.” But by now that remark is just another part of its essential lore—another reason, yes, for potential intimidation.

In the final analysis, the backstory of Lola Montès, the movie, probably won’t overshadow the even more elaborately melodramatic backstory of Lola Montès, the woman. She was, in fact, a real person, a courtesan and dancer who lived from 1821 to 1861. She was, in fact, a lover of (among others) composer Franz Liszt and King Ludwig of Bavaria—whose subjects did, in fact, rise up against him on account of her influence.

But never was she, in fact, a circus showpiece. That’s Ophüls’ invention. That’s the burden and the genius of the film—a comment on the cruel, canned whoredom of celebrity and the titillating romance of movie watching, on the way reverence objectifies female beauty and time steals all pleasures.

The story’s frame is that circus, in which a stoic Martine Carol plays Lola like a cipher or a doll, carefully set within Ophüls’ intricate and ambulant compositions, surrounded by clowns and acrobats and a whip-cracking Peter Ustinov as her partner and ringmaster, who calls her “the most scandalous woman in the world” and takes from the audience impolite questions about her life. These prompt extended flashbacks to what we must take on faith, in the same way we might allow for the irregular but assertive logic of a dream, as the story’s substance: selected highlights of the life itself.

Here, within these inviting, brightly theatrical tableaux, we will meet her composer (Will Quadflieg), her king (Anton Walbrook) and a couple of the less historically significant but nonetheless indelible young men in between (Ivan Desny, Oskar Werner). We will lose track of the threshold between memory and fantasy, between passion and compulsion.

This Lola was a hedonist, it’s fair enough to say, who did manage to live as she wished. But to celebrate the nourishment she felt from being loved was always to be yearning for it. And for all his heavy, painstaking orchestrations, Ophüls somehow maintains this awareness with a feather-light touch. What emerges as the film’s emotional through line is the notion, impervious to a demeaning display of captivity, that even the most dysfunctional of Lola’s relationships were conducted generously, as affirmations of pure romance. Whose notion is it? The protagonist’s? The director’s? The circus-goers? Ours? In any case, it’s more than welcome back on the big screen.