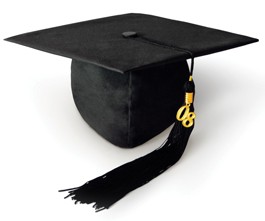 SEVEN-LAYER SARTRE: Yes, voracious readers, there are jobs waiting for you as an English major.

“I think my dad still doesn’t know,” muses Gini Rhoda. “I think a lot of parents’ reactions are just like, ‘OK, that’s a phase.'”

Rhoda says she hadn’t felt rejected by her family; instead, she was always considered a kind of cheerful oddity. It was always in the back of her mind that she would somehow create a living out of doing something she loved, no matter how many people told her it was impossible.

Welcome to the conundrum of the English major.

Majoring in English, however, carries extraordinary flexibility. The tired stereotype is that anyone who spent four years haunting a university English department is limited to teaching, but the truth is there are more options.

Sonoma State University English professor Kim Hester-Williams says her students have gone on to earn MFAs, published poetry, fiction and nonfiction and seen their stage plays and screen plays produced. Some go into a wide range of nonprofit work ranging from international relations to environmentalism. “Advertising was the sort of classic career for an English major. I think law has really replaced that, frankly,” says Hester-Williams. “Many [graduates] become editors of journals or at publishing companies.”

M. Bryn Schut has one year left in the English department. Currently her jobs include working at the Writing Center in the university library and a part-time stint at Taco Bell.

“One of those jobs is really enjoyable. The other involves cheese,” says Schut, who is looking to find something more connected to English.

Of the top 10 jobs chosen by English majors, only two of them involve teaching, according to PayScale.com, a website that compiles salary data to illuminate the job market. The rest are positions as editors, technical writers, the law or working in marketing.

Rhoda is cautiously optimistic, trusting that a livelihood will fall into place. She scored a job at Lanier Publishing International in Petaluma when she moved to the North Bay to attend Sonoma State.

“I’m fairly optimistic for myself, if only because I’ve never really felt like I had a huge roadblock because of being an English major,” says Rhoda. “I’ve never had any difficulty getting a job in the industry that I wanted to, but I know that’s going to change.”

Hester-Williams feels it’s possible, despite all odds, for students to conjure up meaningful careers that connect to their university work. Considering the current economy, holding the Sonoma County unemployment rate at above 10 percent, it’s unclear whether graduate school or diving into the job market is the smarter bet.

Nathanial Garrod moved out to Oklahoma State University to enter a graduate program studying college student development. Long-term, he wants to be a novelist, but he decided against a grad program for English.

“Very few people make it as novelists right away, and I felt like spending tens of thousands of dollars every year to study how to write was stupid,” Garrod says.

English professor Noelle Oxenhandler sees a wide range in choices for her students as they graduate. When job security is anything but, now may be the time to pursue creative and fulfilling interests.

Brian Evans couldn’t care less that his bachelor degree will label him an English major. More important to him is the proof it offers of his ability to handle a college workload.

“I feel like if you work hard, something’s going to happen,” says Evans. “I don’t need a piece of paper that says you studied English. Just because I major in something doesn’t mean that I have to stick with that my whole life.”

That sort of flexibility is the key, says Rhoda. “I look at jobs now, and I don’t feel like there’s a scarcity of opportunities,” she says. “It’s just knowing where to look, and being able to mold the skills to any kind of job that you want.”